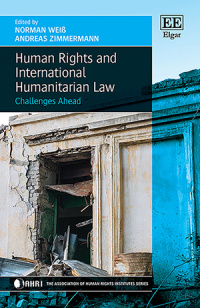 More Information
Contributors
Contents
More Information
Where contemporary developments have significantly altered the implementation methods of, and relationship between, human rights law and international humanitarian law, this timely book looks at the future challenges of protecting human rights during and after armed conflicts. Leading scholars use critical case studies to shed light on new approaches used by international courts and experts to balance these two bodies of law.

Divided into four thematic parts, chapters explore the protection of specific groups and actors during conflicts, including organised armed groups, armed non-state actors, and refugees, as well as using divergent methodological approaches to analyse the extra-territorial application of human rights treaties. Shifting to post-conflict, the book further examines the tools and practices involved in building lasting peace and sustainable post-conflict order while avoiding future resurrection of armed conflict. It concludes by considering whether the traditional interpretation of international law is still apt for the twenty-first century.

Underlining the necessity of a more coherent application of international humanitarian law and human rights law, this incisive book will be invaluable to students and scholars from the two areas of law. Global in scope, it will also prove useful for humanitarian workers, and practitioners and policy makers involved in human rights law.

PART I DURING CONFLICT I: FOCUSING ON
GROUPS AND ACTORS
2 Responsibility for supporting organised armed groups:
a comparison between common Article 1 of the Geneva
Conventions and the ICCPR 12
Daniel Elias Quiñones Møgster
3 Legal fragmentation and obligations for armed non-state
actors: can international humanitarian law and international
human rights law learn from each other? 31
Joshua Joseph Niyo
4 Protection of refugees in the refugee camps: perspectives
on human rights obligations and implied powers of the UNHCR 53
Amity Meng-Ting Hsieh

PART IV NEW APPROACHES AND PERSPECTIVES
11 Inter-state cases under the International Convention on the
Elimination of All Forms of Racial Discrimination 197
David Keane
12 A seat at the table: Islamic law’s neglected potential in
universalising international humanitarian law 223
Julie A. Fraser