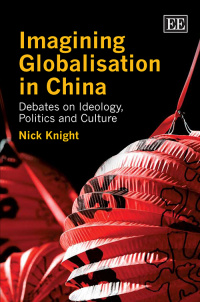 Debates on Ideology, Politics and Culture

Since the mid-1990s, there has been intense interest in globalisation among the leaders and theorists of the Chinese Communist Party (CCP), and amongst non-Party Chinese intellectuals. It is the ideological, political and cultural dimensions of globalisation that are the focus of this book. Employing criteria drawn from the ideological history of the CCP and Western globalisation theory, Nick Knight critically evaluates these debates. He demonstrates that, under the influence of the CCP, a regime of truth has emerged on the nature and benefits of globalisation. The book provides a critical assessment of the Chinese discourse on this important subject.

Drawing on a huge number of Chinese and Western documents on globalisation, this book will be invaluable to academics and students interested in contemporary Chinese politics and ideology, and international relations and globalisation theory. It will also greatly appeal to policymakers interested in China’s position in and perception of the world.
Critical Acclaim
‘This is a fascinating account of how China has confronted the current era of “globalisation”, not just through their use of inward investment, export surpluses and foreign exchange reserves, but also ideologically – how Chinese Communist Party theorists and non-Party intellectuals alike have analysed both the potential benefits and dangers in these global economic developments for Chinese sovereignty and for the prospects for socialism in China.’
– Jonathan Michie, University of Birmingham, UK

‘A product of serious scholarship and extensive research Professor Knight’s fascinating study deserves to be widely read by those with an interest in globalisation and China’s emergence as a global power. It presents a sophisticated analysis of the domestic tensions arising from China’s embrace of globalisation and reactions to it. A significant corrective to the many one dimensional studies of China and globalisation.’
– Tony McGrew, Southampton University, UK

‘One of the least discussed aspects of reform in contemporary China is the commitment of the Communist Party leadership to policies of globalisation. In this important new study, Nick Knight offers a comprehensive discussion of what the Chinese leadership understands by globalisation, the social and political implications of their policies, and the debates the idea of globalisation has provoked within and without the party. Not the least among the study’s virtues is Knight’s grasp of issues within Chinese Marxism that enables him to bring an indispensable critical perspective to these debates.’
– Arif Dirlik, Chinese University of Hong Kong

‘Nick Knight’s close reading of the debate on increased globalisation within China provides an essential analysis for anyone seeking to identify the dynamics of change in that country. In the process he not only highlights the extent to which the idea of globalisation is fashionable yet contested for China, as elsewhere, but also the paradoxes of a Communist Party State embracing a neoliberal agenda and world system.’
– David S.G. Goodman, University of Technology, Sydney, Australia

Contents
Contents: Preface 1. Introduction 2. Precursors to Globalisation in the Marxist Tradition 3. Ideology or Reality? Globalisation and its (Dis)contents in China 4. Globalisation, Socialism and the Search for Ideological Coherence in China 5. The Paradox of Globalisation: China’s Search for Cultural Identity and Coherence 6. China’s Response to Global Capital: Issues of Sovereignty and State Capacity 7. China Goes Global 8. Conclusion Bibliography Index
Add to Wish List