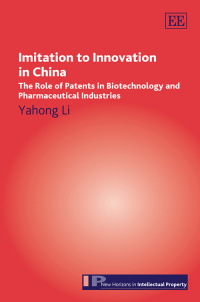 Imitation to Innovation in China

The Role of Patents in Biotechnology and Pharmaceutical Industries

9781848442061 Edward Elgar Publishing
New Horizons in Intellectual Property series
Yahong Li, Associate Professor and Director, LLM Program in Intellectual Property and Information Technology, Faculty of Law, University of Hong Kong
Publication Date: September 2010 ISBN: 978 1 84844 206 1 Extent: 208 pp
Following decades in which China’s approach to technology has been to imitate, the country is now transforming itself to become innovation-oriented. This pioneering study examines whether patents play a similar role in promoting innovation in China as they do in the West, exploring the interplay between patents and China’s biotechnology and pharmaceutical industries in particular.

More Information
Critical Acclaim
Contents
More Information
Following decades in which China’s approach to technology has been to imitate, the country is now transforming itself to become innovation-oriented. This pioneering study examines whether patents play a similar role in promoting innovation in China as they do in the West, exploring the interplay between patents and China’s biotechnology and pharmaceutical industries in particular.

The author argues for a stronger patent regime based on an extensive review of the technological capacity, R&D models, patent filings and litigations, and issues in patent law, which involve China’s biotechnology and pharmaceutical industries. By comparing China with other developing countries and analyzing China’s uniqueness in terms of its development stage, technological capacity and the strengths and weaknesses in its patent system, Yahong Li concludes that China is distinguished from the prevailing view that patents play a limited role in innovation in developing countries. The book also discusses whether and how patents can promote innovation in China’s biotechnology and pharmaceutical industries, based on the study of market scale, R&D capacity, innovation model and patent legislation and cases.

This comprehensively researched book will be invaluable to multinational biotechnology and pharmaceutical companies either doing business or planning to do business in China. Practitioners and policymakers as well as academics and students specializing in IP law, economics and technology should also not be without this eloquent book.
Critical Acclaim
‘This volume fills an important need for understanding about the interplay between China’s intellectual property protection system and the potential for innovation in China’s economy. Using examples from the pharmaceutical and biotech industries, the author suggests that, despite the widely documented challenges facing China’s IPR protection system, the system has a demonstrable effect on innovation. The author suggests that China’s patent system promotes innovation through economic incentives, soft factors of public encouragement, and intentional development strategies. This book is also useful as an overview of China’s biotech and pharmaceutical sectors, offering a range of richly detailed case studies on China’s industrial development strategies in these sectors. A number of important patent disputes between Chinese and foreign companies are also examined to useful effect. In the highly contentious policy world of intellectual property protection and pharmaceutical and biotech industry development, the volume offers a refreshing combination of detail and insight.’
– Pitman B. Potter, University of British Columbia, Canada