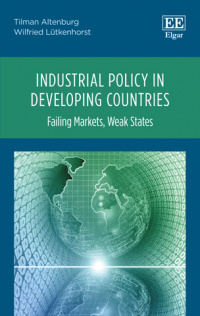 More Information
Critical Acclaim
Contents
More Information
Industrial Policy in Developing Countries offers an in-depth assessment of both the potentials and perils of designing and implementing policy in countries at early stages of economic development. The range of insightful case studies illustrates the key dilemma: directing economic and social development through what are often incipient and weak institutions. This realistic, evidence-based assessment will appeal to both development researchers and industrial policy practitioners, particularly those working in developing countries.
Critical Acclaim
‘Countries that need industrial policy the most typically have the worst governance. This terrific book explicitly recognizes this difficulty, and provides a rich discussion of how it can be overcome. It presents a valuable series of country studies that focus on both successes (such as Ethiopian cut flowers) and failures (such as Namibia’s export processing zones). The authors show that weak capacity is not necessarily a hindrance to effective industrial policy, just as strong capacity does not guarantee it.’
– Dani Rodrik, Harvard University, US

‘This is the book our students have been waiting for.’
– Hubert Schmitz, Institute of Development Studies and Founder of Sussex MA course Competing in the Global Economy

‘A green transformation holds the potential to sustain a healthy planet where ecosystems are well-managed and human well-being is secured for future generations. This book makes a compelling case for the design of industrial policies that support a green economy. Being at the crossroads of their development pathways, developing countries have the unique opportunity to define their industrial policies in a resource-efficient, low-carbon and socially inclusive manner in the context of the Post-2015 Development Agenda.’
– Director, Oxford Martin Institute, Oxford University, UK (former Executive Director UNEP)

‘Historically industrial policy has been conducted by nearly all countries as a way of getting ahead in the international arena. Many have succeeded but many have failed. African countries have particularly failed miserably, mainly because their embryonic governments tried to do too much with too little. The present book provides a refreshing and balanced guidepost for such governments to employ relatively appropriate strands of industrial policy while avoiding the past pitfalls. As such, the book fills an important void in the economic development literature.’
– Augustin K. Fosu, University of Ghana, University of Pretoria, South Africa and University of Oxford, UK

‘A timely reminder both of the necessity of industrial policy and why designing successful industrial policy is so challenging for developing countries. Green technologies, social inclusion concerns and the problems of weak governance and political constraints means that industrial policy has to be appropriate for very specific contexts and problems.’
Mushtaq Khan, SOAS, University of London, UK

‘This is both a why book and a how-to book. It brings together a wealth of firsthand experience, empirical evidence and institutional theory to forge a compelling argument for industrial policy (or “production transformation policy”), even where most parts of the state operate in a manner far from a Weberian bureaucracy. It is highly original, and an enjoyable read into the bargain.’
– Robert H. Wade, London School of Economics, UK and winner of the Leontief Prize in Economics, 2008