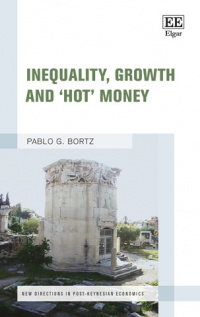 More Information
Critical Acclaim
Contents
More Information
The growing levels of income inequality, an explosion of global financial flows, and a worldwide decline of economic growth have combined to challenge accepted economic wisdom. Utilizing a heterodox approach, Pablo G. Bortz provides a fresh look for understanding the interaction between these three factors while identifying challenges and possible alternatives for an expansionary and progressive economic policy.

Reviewing several schools of thought, Inequality, Growth and ‘Hot’ Money explores the risks generated by capital flows and the limitations they impose on progressive economic policies. Professor Bortz then provides instruments and alternatives to pursue an expansionary and equalitarian program, including theoretical contributions to enrich heterodox and progressive economics. Standout features of this book include a review of the challenges that financial flows pose for developing countries; a redefinition of the role of capital controls; a policy approach that separates interest rate policies from a broader credit policy; and a rejection of the negative relationship between a more egalitarian income distribution and sustained economic expansion.

Expanding the Kaleckian approach to include financial flows, this accessible introduction to heterodox growth models will be appreciated by graduate students and committed heterodox economists. Research departments at official institutions such as central banks may also be interested, specifically in the book’s models and policy prescription.

Critical Acclaim
‘Pablo Bortz has done a remarkable job in presenting an enlightening survey of two key macroeconomic constructs in post-Keynesian economics – the neo-Kaleckian models of growth and distribution and the stock-flow consistent models, both applied to open economies. Bortz also provides an econometric analysis extending these models. The author is not shy to conclude from his studies that a country like Argentina needs to pursue policies based on a reduction in income inequality, and that emerging countries that overly rely on foreign debt and commodity exports are likely to run into problems of financial instability.’
– Marc Lavoie, University of Ottawa, Canada, and University of Paris 13, France

‘In this wide-ranging new book, Pablo Bortz skillfully melds an analysis of private foreign debt and a stock-flow consistent model of international financial flows with a neo-Kaleckian approach to the relationship between income distribution and macroeconomic performance. His model simulations and econometric results demonstrate the key role that unregulated private financial flows play in destabilizing national economies and underscore the flaws in strategies for economic recovery based on fiscal austerity and currency devaluation, as well as the need to reinstitute capital controls. This book will become an important reference for insights into the policy choices facing emerging market and Eurozone countries alike as they seek to escape from the trap of secular stagnation.’
– Robert A. Blecker, American University, US
Contents
Contents: Preface 1. Introduction 2. Growth and Distribution: The Last 300 Years 3. Growth and Distribution: The Kaleckian Perspective 4. An Integration of the Real and the Monetary Economy 5. Financial Flows, Distribution and Capital Controls 6. Epilogue: Challenges and Possibilities References Index