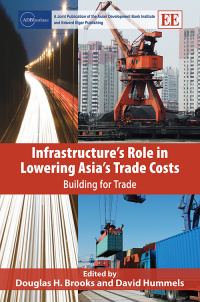 Infrastructure is shown to be a cost-effective means of lowering trade costs and thereby promoting regional growth and integration. This book combines thematic and country studies, while breaking new ground in quantifying infrastructure's impact on Asia’s trade costs. The contributors examine empirical estimates of Asia’s trade costs and infrastructure's influence on those costs while also contributing to a better understanding of the region’s logistics challenges. The book includes interesting case studies of rapid growth and congestion (in PRC), inland transportation challenges (India), port competition in an archipelago (Indonesia) and transportation modal switching as value-added rises (Malaysia) that are policy- and project-relevant in their own right.

The analysis and policy implications in this book will be of interest to trade and infrastructure policy-makers and academics at graduate and higher levels involved in economic development or Asian studies, as well as the broader development community.
Critical Acclaim
‘This edited volume of eight insightful essays offers an excellent immediate overview of the emerging dynamics within the [Southeast Asian] region. . . This book presents a fascinating overview of the manner in which capitalism continues to transform Southeast Asia’s transport infrastructure. . . a fascinating and invaluable accumulation of data, which future historians and social scientists can turn back to and usefully employ when the history of the first part of the Asian twenty-first century is eventually being written.’
– Alex Marshall, East Asia Integration Studies

7. Infrastructure Development in a Fast-Growing Economy: The People’s Republic of China
Liqiang Ma and Jinkang Zhang