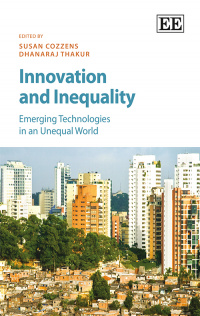 Emerging Technologies in an Unequal World

9781781951668 Edward Elgar Publishing
Edited by Susan Cozzens, Georgia Institute of Technology, US and Dhanaraj Thakur, University of the West Indies, Jamaica
Publication Date: July 2014 ISBN: 978 1 78195 166 8 Extent: 360 pp
Inequality is one of the main features of globalization. Do emerging technologies, as they spread around the world, contribute to more inequality or less? This unique interdisciplinary text examines the relationships between emerging technologies and social, economic and other forms of inequality.

More Information
Critical Acclaim
Contributors
Contents
More Information
Inequality is one of the main features of globalization. Do emerging technologies, as they spread around the world, contribute to more inequality or less? This unique interdisciplinary text examines the relationships between emerging technologies and social, economic and other forms of inequality.

Susan Cozzens, Dhanaraj Thakur, and the other co-authors ask how the benefits and costs of emerging technologies are distributed amongst different countries – some rich and some poor. Examining the case studies of five technologies across eight countries in Africa, Europe and the Americas, the book finds that the distributional dynamics around a given technology are influenced by the way entrepreneurs and others package the technology, how governments promote it and the existing local skills and capacity to use it. These factors create social and economic boundaries where the technology stops diffusing between and within countries. The book presents a series of recommendations for policy-makers and private sector actors to move emerging technologies beyond these boundaries and improve their distributional outcomes.
Offering a broad range of mature and relatively new emerging technologies from a diverse set of countries, the study will strongly appeal to policy-makers in science, technology and innovation policy. It will also benefit students and academics interested in innovation, science, technology and innovation policy, the economics of innovation, as well as the history and sociology of technology.

'. . . this book is improving the lexicon of innovation so that policymakers and scholars alike begin to speak, the think, and to study this process with greater sensibility towards its distributive impacts.'
– Walter D. Valdivia, TechTank

‘This is an original and very well structured and informative book. Its particular interest stems from the multidimensional and detailed analysis of a set of core technologies and their uneven diffusion process in eight countries of quite different levels of development. It challenges received ideas about what really matters to democratize the access to new technologies and provides evidence-based suggestions for policy design. Scholars and students interested in the technological side of inequality will read this book with delight.’
– Judith Sutz, Universidad de la República, Uruguay

‘This book will be valuable to scholars, students, and policymakers concerned with maximizing the benefits of new technologies and extending their distributional boundaries to reduce inequality.’
– Eric Anderson, Science & Public Policy

Innovation and Inequality: Emerging Technologies in an Unequal World

2. An Introduction to the Case Study Countries
Dhanaraj Thakur and Susan Cozzens

13. The Diffusion of Emerging Technologies in a Micro-Economy: Implications for Malta
Lisa A. Pace

14. Policies for Technological Innovation with Equity: The Case of Mozambique
Roland Brouwer and Lídia Brito