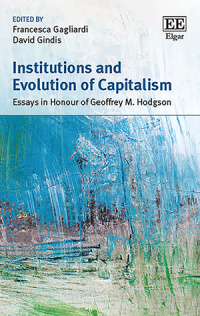 Institutions and Evolution of Capitalism

9781785364990 Edward Elgar Publishing
Edited by Francesca Gagliardi and David Gindis, University of Hertfordshire, UK
Publication Date: 2019 ISBN: 978 1 78536 499 0 Extent: 384 pp
In just over 30 years, Geoff Hodgson has made substantial contributions to institutional economics, evolutionary economics, economic methodology, the history of economic thought and social theory. To mark his seminal work, this volume brings together original contributions by world-leading scholars in specific areas that have played a significant role in influencing his thinking or represent key debates to which he has contributed. Building on some of the most significant philosophical and methodological foundations underlying Hodgson's work, the volume is organised around the recurring themes of institutions, evolution and capitalism.

More Information
Critical Acclaim
Contributors
Contents
More Information
Geoff Hodgson has made substantial contributions to institutional and evolutionary economics, economic methodology, the history of economic thought and social theory. To mark his seminal work, this book features original contributions by world-leading scholars from fields that have played a significant role in influencing his thinking or represent key debates to which he has contributed.

Building on some of the central philosophical and methodological foundations underlying Hodgson’s thinking, the book is organized around the recurring themes of institutions, evolution and capitalism. The contributors explore key connections between philosophy, the history of economic thought, and institutional and evolutionary economics in the light of Hodgson’s often path-breaking work.

A vital read for institutional, evolutionary and heterodox economists, this book sheds new light on Hodgson’s position in these fields. Drawing together critical insights, this is also an important book for economics scholars looking to improve their understanding of current theory.

Critical Acclaim
‘The 19 original contributions that are gathered in this book are of the utmost interest. One cannot but recommend reading them and, of course, reading the book.’
– Alain Marciano, The Review of Austrian Economics

‘For anyone with an interest in Hodgson’s work, this book is a useful supplement to Hodgson’s key publications. For academic lawyers contemplating reading the book, consideration should be given to Deakin’s concluding sentiment: "Hodgson’s work has shown that lawyers and economists can engage in a mutually beneficial conversation about the institutional bases of market economies, and this should be supported if a genuinely useful ‘law and economics’ movement is to emerge".’
– Richard Craven, Social & Legal Studies

‘We are in an era when fundamental debates about the nature of the economy and economics are not mere academic curiosities but an urgent necessity for society. Long-dominant theories have crumbled and major challenges loom. Bold new thinking is required and few have been bolder than Geoffrey Hodgson. This volume, by a distinguished group of scholars, gives new insights into Hodgson’s decades-long body of work and will surely spark new ideas and debate. The economy is an evolutionary system and someday future historians will say “Hodgson was right.”’
– Eric Beinhocker, University of Oxford, UK and author of The Origin of Wealth

‘This impressive collection is a fitting tribute to Geoff Hodgson, with substantial contributions from senior colleagues covering the many areas in economics in which he has worked over the course of a long and successful career.’
– Jochen Runde, University of Cambridge, UK

‘Geoffrey Hodgson has for some time been one of the most creative and provocative writers arguing for a more evolutionary economics that paid more attention to the institutions driving and molding economic change. This collection of essays in his honor is of broad scope and high quality. They provide a pleasurable, informative read.’
– Richard R. Nelson, Columbia University, US

‘Whether you sign on to every proposition in neo-institutionalism or not, you will want to own this stunning volume. All the best bowlers are here, at the top of their games, the better to test your batting skills. It’s a testimony to Hodgson’s breadth and brilliance, but more: the state of play in a major field of economics.’
– Deirdre Nansen McCloskey, University of Illinois at Chicago, US
Contributors
Contributors: M.C. Becker, C. Camic, J.B. Davis, S. Deakin, K. Dopfer, G. Dosi, S.C. Dow, F. Gagliardi, D. Gindis, J. Groenewegen, G.M. Hodgson, T. Knudsen, R.N. Langlois, T. Lawson, L. Marengo, C. Ménard, J.S. Metcalfe, P. Mirowski, A. Nuvolari, U. Pagano, J. Potts, J.W. Stoelhorst, A. Tylecote, V.J. Vanberg, J. Vromen