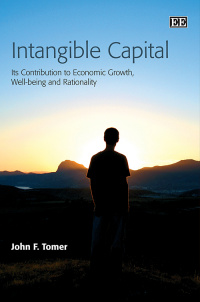 Its Contribution to Economic Growth, Well-being and Rationality

9781847200884 Edward Elgar Publishing
The late John F. Tomer, formerly Emeritus Professor of Economics, Manhattan College, US
Publication Date: 2008 ISBN: 978 1 84720 088 4 Extent: 296 pp
Despite increasing research efforts, there is still much confusion regarding the nature and contribution of the most intangible forms of capital. This book develops a comprehensive and unifying conception of intangible capital in order to understand its role with respect to economic growth, well-being, and rationality. As the book illustrates, utilizing the intangible capital concept enables many new and important economic insights. Intangible capital is defined to include standard human capital, noncognitive human capital (including personal capital), social capital, and other intangible manifestations of human capacity. Understanding intangible capital is a key to realizing the full human potential of our economic systems.

Explaining how the main components of intangible capital contribute to economic growth, this book will be of great interest to social scientists in the fields of heterodox, behavioural and social economics, social capital, HRM, and economic and organizational change. It will also be of considerable value to government policymakers and business managers interested in the role and implications of intangible capital and intangible assets for productivity, growth and the performance of firms. Philosophers and psychologists, among others, should find the chapters dealing with intangible capital in relation to well-being and rationality of particular interest.
Critical Acclaim
‘Tomer provides a well-timed contribution to the discussion on the importance of the softer side of human capital, or the wetware connecting cognitive knowledge and physical inputs. The volume will appeal to those interested in heterodox economics, as well as those interested in exploring the overlap between economics, political science, philosophy, and psychology.’
– Carol A. Robbins, Eastern Economic Journal

‘Tomer extends and deepens his original formulation of intangible capital, providing an analytical framework for better understanding macro and microeconomic phenomenon and why and how society and individuals fall below potential. A key strength of Tomer’s approach is that he broadens traditional economic analyses, demonstrating how both theory and one’s insights into socio-economic reality can be enriched by integrating often difficult to formulize concepts into our modeling framework. Tomer provides us with a challenging and important contribution to economic analysis, enticing us to explore the important types of capital that have for too long been locked out of the economist’s toolbox.’
– Morris Altman, University of Saskatchewan, Canada

7. Intangible Factors in the Eastern European Transition: A Socio-Economic Analysis

9. Addictions Are Not Rational: A Socio-economic Model of Addictive Behavior

13. Why We Need a Commitment Approach to Environmental Policy
with Thomas R. Sadler

14. Economic Man versus Heterodox Men: The Concepts of Human Nature in Schools of Economic Thought

PART V: SUMMING UP
15. Conclusion: Intangible Capital and the Human Potential of the Socio-economy

A Modern Guide to Philosophy of Economics