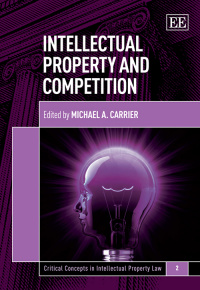 More Information
Critical Acclaim
Contributors
Contents
More Information
‘Professor Carrier has done an excellent job of assembling the most significant scholarship on the intersection of intellectual property and competition laws. The major schools of thought are fairly represented. This volume is comprehensive and includes both the essential foundational work in this field as well as recent influential commentaries on the latest controversies, including patent pools, refusals to license, and reverse settlements in pharmaceutical patent litigation.’
– Christopher R. Leslie, University of California – Irvine, US

The intersection of the intellectual property and competition laws presents uniquely complicated legal issues. In this essential volume Professor Carrier brings together 14 of the most important works written about the intersection. The entries, from leading judges, government officials, academics, and economists, explore history, the ‘new economy’, and frameworks to resolve the tension between the laws. They also address refusals to license, patent pools, innovation markets, standard setting organizations, and pharmaceutical patent settlements. Alongside an original introduction, this book is an authoritative reference tool for attorneys, academics, and others interested in intellectual property and competition issues.
Critical Acclaim
‘. . . Carrier has provided intellectual property and competition scholars and practitioners with an invaluable resource.’
– Abbe E.L. Brown, World Competition

‘. . . this book is a wonderful reference tool for anyone who practices in or is interested in studying the intersection between intellectual property and competition, and how those areas have evolved together over the years.’
– Alicia Brillon, American Reference Books Annual 2012

‘. . . the real benefit of Intellectual Property and Competition is the impression it leaves on the reader as a single volume. . . Commentators, economists, academics and the judiciary all have their say in this collection and it is apparent that most are in favour of some form of reform.’
– Mark Daniels, European Intellectual Property Review

‘The editor has chosen his contributors , and the contributions, with the skilled eye of the connoisseur, to the benefit of the serious student of this tricky topic.’
– IPKAT
Contributors
14 articles, dating from 1966 to 2008
Contributors include: W. Baxter, H. Hovenkamp, L. Kaplow, M. Lemley, R. Merges, R. Pitofsky, R. Posner, A. Rai, C. Scott Hemphill, C. Shapiro
Contents
Contents:

PART I HISTORY
1. Herbert Hovenkamp (2005), ‘The Conflict Between Antitrust and Intellectual Property Rights’