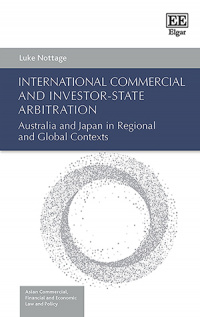 Australia and Japan in Regional and Global Contexts

9781800880818 Edward Elgar Publishing
Asian Commercial, Financial and Economic Law and Policy series
Luke Nottage, Professor of Comparative and Transnational Business Law, University of Sydney Law School, and Special Counsel, Williams Trade Law, Australia
Publication Date: 2021 ISBN: 978 1 80088 081 8 Extent: 424 pp
This thought-provoking book combines analysis of international commercial and investment treaty arbitration in order to examine how they have been framed by the twin tensions of ‘in/formalisation’ and ‘glocalisation’. Taking a comparative approach, the book focuses on Australia and Japan in their attempts to become regional hubs for international arbitration and dispute resolution services in the increasingly influential Asia-Pacific context as well as a global context.

More Information
Critical Acclaim
Contents
More Information
This thought-provoking book combines analysis of international commercial and investment treaty arbitration to examine how they have been framed by the twin tensions of ‘in/formalisation’ and ‘glocalisation’. Taking a comparative approach, the book focuses on Australia and Japan in their attempts to become regional hubs for international arbitration and dispute resolution services in the increasingly influential Asia-Pacific context as well as a global context.

Interweaving historical, empirical and doctrinal research from over two decades of work in the field, Luke Nottage provides an interdisciplinary perspective on the shifting state of arbitration over this period. Chapters incorporate empirical findings on topics such as case disposition times for arbitration-related court proceedings, media coverage of arbitration and Arb-Med patterns in Japanese arbitrations. The book also makes normative arguments for more concerted bilateral and regional efforts to maintain global approaches and to encourage renewed informalisation in international arbitration.

This book will be an invaluable read for both scholars and practitioners of international commercial arbitration and dispute resolution, particularly those in or involved with the Asia-Pacific region. Government policy-makers and investment treaty negotiators will also find its insights useful.
Critical Acclaim
‘The book would be useful for readers interested in the history of international commercial arbitration or investor-state arbitration; or for those especially interested in how each of these have played out within either Australia or Japan. Libraries with collections in either of these areas would benefit from this book, especially if they are able to point readers to specific chapters of interest.’
– Taryn Marks, International Journal of Legal Information

‘Anyone who practices international arbitration in the Asia-Pacific region or is a scholar of the field will enjoy this book and find it useful as a resource in the years ahead. For younger practitioners especially, this book will have special value, as it explains the diverse forces that have shaped the legal framework for international arbitration and produced the vibrant market we have today – a market that one could be forgiven for thinking was always there, but which in fact is a relatively new construct.’
– Sam Luttrell, The Australian Law Journal

‘This is a much-awaited book that illuminates international arbitration perspectives, policies, and practices of two major economies in the Asia-Pacific region. Particularly, perhaps reflecting the relative paucity of ISDS cases involving Japanese investors or the Japanese government, there is a general paucity of prior scholarship on Japan’s ISDS approaches, and this book fills this gap. At a time when ISDS is at a crossroads, the author’s acute analysis of state practice and policy formation based on analytical frameworks of “localised globalism” and “in/formalisation” provides invaluable guidance for domestic and international policy-makers, private practitioners, and academics.’
– Tomoko Ishikawa, Nagoya University, Japan

‘Cross-border dispute settlement in the Asia-Pacific has grown increasingly complex and dynamic in recent years. In this book, one of our keenest observers of the region traces evolving developments in Australia and Japan, examining the trajectories of commercial and investor-state arbitration within a common framework. We could have no better guide to the shifts, stops and starts that have characterized this evolving field of law and practice.’
– Tom Ginsburg, University of Chicago, US