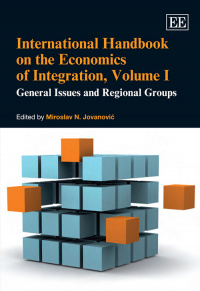 International Handbook on the Economics of Integration, Volume I

More Information
Critical Acclaim
Contributors
Contents
More Information
With this Handbook, Miroslav Jovanović has provided readers with both an excellent stand-alone original reference book as well as the first volume in a comprehensive three-volume set. This introduction into a rich and expanding academic and practical world of international economic integration also provides a theoretical and analytical framework to the reader, presenting select analytical studies and encouraging further research.

International Handbook on the Economics of Integration, Volume I covers two broad themes: general integration issues and regional integration groups. The first part discusses topics that range from an overview of the regional integration deals registered with the World Trade Organization, to multilateralism and regionalism, hub-and-spoke integration networks, limits to integration, rules of origin, and globalization. The second part of the Handbook is devoted to an outline of the principal integration arrangements in Europe, the Mediterranean, North and Latin America, East Asia and sub-Saharan Africa, as well as economic integration efforts throughout the Arab world.

7. The Economic Case for Reciprocal Trade Negotiations: Gains from Both Imports and Exports
Paul Wonnacott and Ronald J. Wonnacott

8. Understanding the Barriers to Entry Effects of Rules of Origin in Preferential Trading Arrangements with an Application to Asian FTAs
Olivier Cadot, Jaime de Melo and Alberto Portugal-Pérez

9. The Limits to Integration
Michele Fratianni and Francesco Marchionne

14. From the Barcelona Process to the Union for the Mediterranean: Rhetoric versus the Record
Yiannis Tirkides and Andreas Theophanous

22. Towards a Relance Arabe? Bilateral and Regional Economic Integration Initiatives in the Middle East and North Africa
Tomer Broude