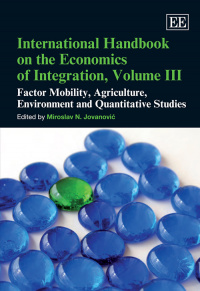 International Handbook on the Economics of Integration, Volume III

International Handbook on the Economics of Integration, Volume III covers three broad themes: factor mobility (transnational corporations and labour migration); agriculture and environment; and quantitative studies of integration effects. A removal of barriers for the mobility of factors in certain integration arrangements among countries has an impact on the mobility of capital, firms and individuals within the group. Various aspects of this factor mobility are analysed in eight detailed chapters. The second theme of the Handbook is devoted to agriculture and environment. This is of great global relevance as the Common Agricultural Policy of the EU has been a bone of contention in international relations over several decades. Finally, seven quantitative studies of the effects of integration attempt to measure various potential benefits of regional integration efforts.

3. The Integration and Fragmentation Roles of Transnational Companies
Grazia Ietto-Gillies

5. Economic Integration from Above and Below with the Evidence of Japanese MNEs in Europe
Ken-ichi Ando

10. The Reforms of the Common Agricultural Policy
Huib Silvis and Roel Jongeneel

17. Policy Liberalisation and US Integration with the Global Economy: Trade and Investment between 1980 and 2006
Gary Hufbauer and Matthew Adler

18. GATT/WTO Membership and its Effect on Trade: Where Do We Stand?
Andrew K. Rose