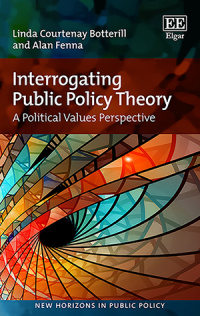 9781784710071 Edward Elgar Publishing
New Horizons in Public Policy series
Linda Courtenay Botterill, University of Canberra and Alan Fenna, Curtin University, Australia
Publication Date: 2019 ISBN: 978 1 78471 007 1 Extent: 208 pp
This book questions the way policy making has been distanced from politics in prevailing theories of the policy process, and highlights the frequently overlooked ubiquity of values and values conflicts in politics and policy. It examines the strengths and weaknesses of current theories, reviews the illusions of rationalism in politics, and explores the way values are implicated throughout the democratic process, from voter choice to policy decisions. It argues that our understanding of public policy is enhanced by recognizing its intrinsically political and value-laden nature.

More Information
Critical Acclaim
Contents
More Information
A common refrain when policy diverges from ‘ideal’ is ‘if only we could take the politics out of the policy process’. The authors of this book argue that rationalist dreams of this nature fail to recognize that policy making is inherently part of politics; policy is the mechanism for giving citizens in a democracy the societal outcomes they seek. In a new and innovative way of thinking about public policy, the book places values at the centre of the analysis. It argues that citizens have differing visions of the good society and different values priorities. In making decisions on behalf of the whole community, policy makers need to recognize and manage these values differences. And in the same way, students of the policy process need to connect what government does with the wider political processes typical of a democratic society.

The book casts a critical eye over public policy theory, introduces the reader to research on human values, explores the importance of language, rhetoric and persuasion, and draws on the insights from various strands of psychology in order to understand the realities of policy making in liberal democracies. In so doing, Interrogating Public Policy Theory offers a refreshing alternative to existing analyses of the policy process.

This book will be a vital tool for public policy scholars, as well as those upper-level students searching for a map of the policy studies field and a critical examination of the dominant theoretical perspectives. It will also be a unique, and innovative, reference for public policy practitioners seeking more realistic accounts of the policy process that help conceptualize the nature of policy conflict.
Critical Acclaim
‘In this provocative volume, Botterill and Fenna make a strong case that the policy sciences have gone wrong, almost from the start, in embracing the rational chimera of an ordered and evidence-informed policy process while ignoring or downplaying the messy, value-laden, struggle which actually is public policy making. Building from a cogent critique of three of the major contemporary frameworks in the policy sciences – the Advocacy Coalition Framework (ACF), the Multiple Streams Framework (MSF) and the Punctuated Equilibrium Theory (PET) – the authors argue that the insights which can be gleaned from political sciences-based research into public values, discourses, ideologies and conflicts serves as a much better base from which to construct a new Policy Science.’
– Michael Howlett, Simon Fraser University, Canada

‘The book combines critical analysis of established theories of the policy process illuminating their detachment from the political realities they seek to explain. By re-connecting analysis of public policy with politics, Botterill and Fenna’s volume is set to become a key reference for social scientists concerned with the role values play in the policy process.’
– Claire A. Dunlop, University of Exeter, UK

‘This book provides a much-needed wake up call for students of public policy. Its core claim that values, indeed political values, are at the very heart of public policy making and that therefore they should occupy a central place in policy analysis, is right on the mark. For too long has the field been dominated by theories of the policy process that conveniently ignore this foundational insight. Instead of perpetuating as these models do the myth of a rational public policy, Botterill and Fenna's hard-hitting critique takes us back to what really matters: the clash between contending ideas of the good society and the role and limits of the state's public problem-solving capacity.’
– Paul 't Hart, Utrecht University School of Governance, the Netherlands
Contents
Contents: Preface 1. Public Policy and Political Values 2. Studying Public Policy 3. Understanding Values 4. Rationalism and its Critics 5. The Persistence of the Rational Dream 6. Theorizing Public Policy: Multiple Streams and Advocacy Coalitions 7. Theorizing Public Policy: Punctuated Equilibrium Theory and Beyond 8. Public Policy, Values and the Political Process 9. Values in Policy Debate 10. A Political Values Perspective References Index

A Modern Guide to National Urban Policies in Europe