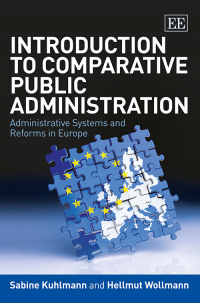 Administrative Systems and Reforms in Europe

Critical Acclaim
‘Since Ferrel Heady's death over a decade ago, comparative public administration badly needed a first-rate, current survey text. Sabine Kuhlmann and Hellmut Wollmann performed an invaluable service by authoring this exemplary, up-to-date European Comparative Public Administration Textbook. I know of none like it on the market today, for its clarity of prose, concise outline of key concepts, as well as comprehensive synthesis of where we are right now within this rapidly moving, ever-expanding vital area of administrative sciences. Their book is “a must read” and "must use" for teaching comparative public administration throughout Europe and beyond.’
– Richard J. Stillman II, University of Colorado, Denver, US

‘This is a much-needed and long-awaited book that makes systematic, theory-informed and in-depth comparisons of public administrative systems in Europe how they have developed over time and how they have reacted to new reform trends like New Public Management. The book combines in a very good way cross-national, cross-sectoral and multi-level comparisons and gives a lot of fresh information on the functioning of the systems. It shows in a very instructive way how the systems both diverge and converge.’
– Tom Christensen, University of Oslo, Norway
Contributors