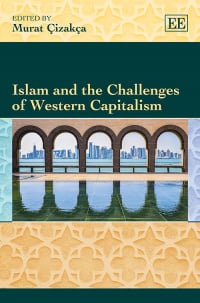 Islam and the Challenges of Western Capitalism

9781783478880 Edward Elgar Publishing
Edited by Murat Çizakça, Professor of Islamic Finance, Comparative Economic and Financial History, INCEIF University, Kuala Lumpur, Malaysia
Publication Date: 2014 ISBN: 978 1 78347 888 0 Extent: 560 pp
This unique book brings together some of the finest minds in comparative economic / financial history and modern Islamic finance to discuss the rise, the decline and the contemporary efforts to regenerate Islamic capitalism. The collection features articles on the contribution of classical Muslim scholars to the history of economic thought, the institutions that translated these ideas into everyday life and whether these thoughts and institutions constitute a clash or a symbiosis of civilizations. The efforts of contemporary Muslim thinkers to design a modern Islamic economy are also carefully scrutinized.

More Information
Critical Acclaim
Contributors
Contents
More Information
This unique book brings together some of the finest minds in comparative economic / financial history and modern Islamic finance to discuss the rise, the decline and the contemporary efforts to regenerate Islamic capitalism. The collection features articles on the contribution of classical Muslim scholars to the history of economic thought, the institutions that translated these ideas into everyday life and whether these thoughts and institutions constitute a clash or a symbiosis of civilizations. The efforts of contemporary Muslim thinkers to design a modern Islamic economy are also carefully scrutinized.

These collected works are expertly summarised by the editor in an original introduction and will be welcomed by all those with an historical or contemporary interest in Islamic studies.

Critical Acclaim
‘This impressive volume is long overdue. Its starting point is that historically the West met the challenge of Islamic civilization by developing its own form of capitalism and Islamic societies need to do likewise today, and the book provides a comparative analysis of the growth of modern Islamic institutions, assesses their achievements and outlines a blueprint for their future structure. The editor is a noted expert in these topics and, led by his own contributions, the collection of articles offers a well-organized and fascinating account.’
– Mervyn K. Lewis, University of South Australia

‘The relationship between Islam and capitalism is multifaceted, as it involves not only trade and financial flows, but also business organisation and culture. Causality is two way, as although in modern times capitalism has influenced Muslim economies, in the past capitalist practices were shaped by Islamic thinking. History may well be repeated given the emergence of Islamic finance as an alternative banking model and the development of Shari’ah compliant capital market instruments. Western critics of capitalism and its resultant inequalities, who have become increasingly interested in Islamic finance as an ethical alternative, should find this book of value. The excellent collection of articles reveals the breadth of the interaction of Islam with capitalism, which Murat Çizakça views as a symbiosis rather than a clash of civilizations. Hence by bringing together such divergent sources the editor provides a fresh perspective on this complex relationship. The categorisation of the articles is helpful and should guide future researchers interested in comparative economic systems as well as those primarily concerned with Islam. The volume should be an essential purchase not only for libraries with Islamic studies collections but also for those with political economy and history of economic thought sections.’
– Rodney Wilson, Durham University, UK and INCEIF University, Malaysia

‘Under a title inspired by the dichotomous histories of Islamic and Western capitalism, Çizakça and the individual authors navigate through a detailed examination of Islamic institutions and their role in the evolution of Western capitalism. Theoretically this book builds upon a variety of case studies from the birth of Islam in the seventh century to the contemporary Islamic financial networks nurtured by the Hajj. Equally convincing are the models of Islamic finance which illustrate its flexibility in the face of contemporary realities. The volume is highly instructive in examining the development of innovative community-centred financial initiatives like the cash waqf, while addressing the issue of convergence and divergence between Islamic capitalism and western capitalism. Çizakça, a leading expert on Islamic economics, thus makes a powerful case for its role in shaping the commanding heights of Western capitalism.’
– Rajeswary Ampalavanar Brown, Royal Holloway College, University of London, UK
Contributors
25 articles, dating from 1985 to 2013
Contributors include: S.O. Alhabshi, Z.A. Aziz, O.I. Bacha, M.U. Chapra, Z. Hasan, A. Mirakhor, V. Nienhaus, Ş. Pamuk, M.N. Siddiqi, M.T. Usmani

PART I HISTORICAL BACKGROUND
A Not Clash, But Symbiosis of Civilizations
1. Abbas Mirakhor (1987), ‘Muslim Contribution to Economics’
2. Murat Çizakça (2013), How Civilizations Borrow Institutions From Each Other
B Why Islamic Capitalism Fell Behind
3. Murat Çizakça (2012), ‘Long Term Causes of Decline of the Ottoman / Islamic Economies’
4. Şevket Pamuk (2004), ‘Institutional Change and the Longevity of the Ottoman Empire, 1500–1800’
C The Way to Recovery: Why the Existing Systems Developed in the West Would Not Suffice
5. M. Umer Chapra (1991), ‘The Need for a New Economic System’
6. Syed Othman Alhabshi (1987), ‘The Role of Ethics in Economics and Business'
D From Theory to Application: Pre-Conditions for the Success of the New System
7. Saïd Amir Arjomand (2009), ‘The Constitution of Medina: A Sociolegal Interpretation of Muhammad’s Acts of Foundation of the Umma’
8. Murat Çizakça (2007), ‘Democracy, Economic Development and Maqasid al-Shari’ah’, Review of Islamic Economics, 11 (1), 101–18 [18]

PART II THE ACHIEVEMENTS SO FAR
A Ungku Aziz and Tabung Haji: Reorganization of the Pilgrimage
9. Murat Çizakça (2011), ‘The lembaga urusan dan Tabung Haji: financing the Modern Pilgrimage’
B The Birth and Evolution of Islamic Banks
10. Ann Elizabeth Mayer (1985), ‘Islamic Banking and Credit Policies in the Sadat Era: The Social Origins of Islamic Banking in Egypt’
11. Volker Nienhaus (2011), ‘Islamic Finance Ethics and Shari'ah Law in the Aftermath of the Crisis: Concept and Practice of Shari'ah Compliant Finance'
12. Zubair Hasan (2010), ‘Islamic Finance: The Structure-Objective Mismatch and its Consequences'
13. Zeti Akhtar Aziz (2013), ‘Financial Stability, Economic Growth and Development’