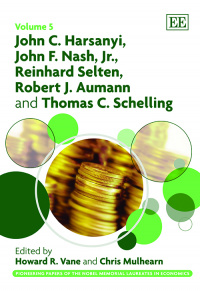 More Information
Critical Acclaim
Contributors
Contents
More Information
‘The nature, content and boundaries of economics are changing. There is no better way of examining the key contributions that have shaped the discipline in the last half century than by looking at the pioneering works of the Nobel Laureates in Economics. These volumes not only provide a treasure house of material of high intrinsic worth, but also help us to understand what kind of approaches and ideas have been successful in persuading other economists, and thereby provide valuable material for understanding the evolution of the discipline. The idea behind this series of volumes is brilliant.’
– Geoffrey M. Hodgson, University of Hertfordshire Business School, UK

This groundbreaking series brings together a critical selection of key papers by the Nobel Memorial Laureates in Economics that have helped shape the development and present state of economics. The editors have organised this comprehensive series by theme and each volume focuses on those Laureates working in the same broad area of study. The careful selection of papers within each volume is set in context by an insightful introduction to the Laureates’ careers and main published works. This landmark series will be an essential reference for scholars throughout the world.
Critical Acclaim
‘What a brilliant idea! To provide readers with both information on the Nobel Laureates in Economics and, to the degree possible, the original papers for which they were honored. The names of the “contributing” Laureates speak for themselves. Howard Vane and Chris Mulhearn, the editors, and Edward Elgar, the publisher, are to be congratulated for putting the idea into effect.’
– Warren J. Samuels, Michigan State University, US

Introduction to Part I
Howard R. Vane and Chris Mulhearn