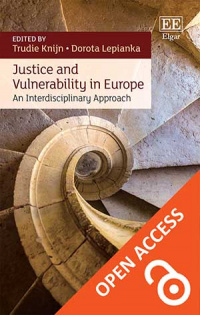 Justice and Vulnerability in Europe contributes to the understanding of justice in Europe from both a theoretical and empirical perspective. It shows that Europe is falling short of its ideals and justice-related ambitions by repeatedly failing its most vulnerable populations.

More Information
Critical Acclaim
Contributors
Contents
More Information
Justice and Vulnerability in Europe contributes to the understanding of justice in Europe from both a theoretical and empirical perspective. It shows that Europe is falling short of its ideals and justice-related ambitions by repeatedly failing its most vulnerable populations. Interdisciplinary and expert contributors search for the explanations behind these failing ambitions through analysis of institutional discourse, legal debate and practice and the daily experiences of vulnerable populations, such as those dependent on social care and welfare. By setting tentative criteria for justice as ‘participatory parity’, in line with the insights of the political philosopher Nancy Fraser, the book challenges European policy makers to re-define redistributive, recognitive and representative justice.

Original and incisive, Justice and Vulnerability in Europe is an invaluable resource for policy makers at European, national and local levels. It is also highly relevant to scholars and students of public and social policy, social justice, politics and law.
Critical Acclaim
‘Justice is often thought of as a theoretical concern of philosophers and social theorists. This book vitalizes discussions about justice and makes them accessible to a broader audience in a truly inspiring way. Impressive and convincing, it brings philosophers together with legal scholars and sociologists to discuss the realities and injustices in a Europe and EU formed by different welfare regimes and austerity policies. It invites us to reflect on whether we can think of a European theory of justice taking into account its historical, cultural and institutional legacy – and its diversity. It’s a fantastic book, a “must read” for scholars – and students – interested in justice, Europe and the EU, marginalization, discrimination, care and recognition.’
– Hanne Marlene Dahl, Roskilde University, Denmark

‘Here is a highly anticipated book. Among its innumerable qualities, let’s stress three of them: it’s the result of a very robust research project (ETHOS), which articulates theoretical reflections and results of in-depth empirical studies; it formulates an analytical framework in Europe and for Europe; last but not least, it suggests a non-ideal, contextual and critical approach to social justice. An approach that is reachable for social actors, especially the most vulnerable. What a breath of intellectual fresh air! This book should circulate in all hands: those of researchers as well as those of citizens, those of activists and those of political leaders. The EU is in crisis? Nothing but an additional reason to dive into this fundamental and highly stimulating book. More than a book: a cornerstone. To read and study … urgently.’
– Matthieu de Nanteuil, UCLouvain, Belgium

‘This very substantial book – both in size and content – takes us on a critical path. Based on a largely European context, examining the “entities and activities” of groups and institutions, the authors ask how a theory of justice links to the messy reality on the ground: for example, how in practice, as opposed to theory, do we recognize others as equals; a particularly pertinent question at a time of the global Black Lives Matter movement. This is a deeply researched, thoughtful and compelling book which should be of value to both philosophers and those who, in everyday practice, attempt to promote a practice, however complex and messy, which meets the needs of the most vulnerable in our society.’
– Gary Craig, Newcastle Law School, UK
Contributors
Contributors: B. Akkan, B. Anderson, S. Araújo, J. Belic, A. Buğra, S. de Maagt, S. de Vries, P.-L. Dupont, S. Ferreira, M.P. Granger, J. Hiah, T. Knijn, D. Lepianka, M.P. Meneses, B. Oomen, S. Rippon, B. Safradin, O. Salát, T. Theuns, A. Timmer, B. van den Brink, M. Zala

5. Four Or Fewer Freedoms: Justice Contested And Codified Between 1941 And 1957
Barbara Oomen And Alexandra Timmer

7. The Impact Of The European Charters In Times Of Crisis And Their Role In Effectuating Social Justice Ideals For European Citizens
Barbara Safradin And Sybe De Vries

10. Just Care For The Elderly And Disabled
Trudie Knijn And Jing Hiah

15. European Justice In Times Of The Corona Crisis – Some Preliminary Reflections
Trudie Knijn And Dorota Lepianka