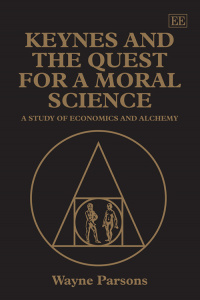 Keynes and the Quest for a Moral Science

A Study of Economics and Alchemy

9781849802918 Edward Elgar Publishing
Wayne Parsons, Professor of Public Policy, Wales Governance Centre, Cardiff University, UK
Publication Date: 2010 ISBN: 978 1 84980 291 8 Extent: 240 pp
Keynes and the Quest for a Moral Science is an accessible, highly readable account which will appeal to scholars and students in the field of economics, history of economics, public policy and history of ideas.

As a political scientist Parsons believes that, if we are to grasp the revolutionary nature of Keynes’s way of thinking about policy problems, we need to place his theories in a wider intellectual and inter-disciplinary setting. Keynes, he suggests, was a social scientist, philosopher and opinion-former with one foot in the age of science and another in the age of sorcery. Like Newton, about whom Keynes wrote with considerable knowledge and insight, he was a thinker whose method was rooted in an alchemical fascination with the art of transmutation and the quest for the philosophers’ stone. Parsons maintains that unless we appreciate this alchemical quality of Keynes’s economics we fail to comprehend his particular genius as a philosopher of possibility. The author paints a portrait of a Bloomsbury Faust, a Mephistopheles in Whitehall: an image which is a long way removed from the modernist discourse which has largely framed our reading of his economics. Free from the mechanistic and positivistic language which has come to obscure his work Wayne Parsons concludes that Keynes can once again become a source of inspiration and illumination for the theory and practice of public policy.

Keynes and the Quest for a Moral Science is an accessible, highly readable account which will appeal to scholars and students in the field of economics, history of economics, public policy and history of ideas.
Critical Acclaim
‘Keynes and the Quest for a Moral Science will attract both intellectuals who love ideas and public policy proponents who are looking for a coherent and practical schemata. It is very readable, there is a defined theme, and the author has a learned and fertile mind.’
– Athol Fitzgibbons, International Journal of Social Economics

‘. . . an interesting and worthwhile addition to the growing literature interpreting the interaction between Keynes the man and Keynes the economist. Parsons’s notion of the fundamental importance of Keynes the moral scientist is well done and is the book’s major contribution. . . the device of contrasting Keynes the pre-modern (moral) alchemist with Keynes the modernist scientist. . . was both useful and illuminating. . . this book is a very worthy contribution to the understanding of a new approach to Keynesian economics.’
– Richard X. Chase, University of Vermont, US
Contents
Contents: Preface and Acknowledgements 1. A Bloomsbury Faust 2. Newton’s Alchemy and Keynes’s Moral Science 3. Auri Sacra Fames: Money, Sex and Religion 4. Squaring the Circle: The General Theory 5. War and the Transmutation of Capitalism 6. Out of the Ashes: Keynes’s Policy Science Index
Add to Wish List