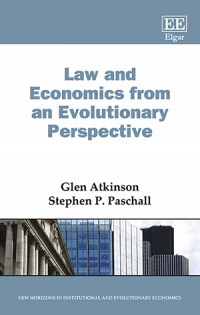 Law and Economics from an Evolutionary Perspective

9781785361296 Edward Elgar Publishing
New Horizons in Institutional and Evolutionary Economics series
Glen Atkinson, Foundation Professor Emeritus, University of Nevada, Reno, Nevada and Stephen P. Paschall, Lovett Bookman Harmon Marks LLP and Adjunct Professor of Law, University of Pittsburgh Law School, Pittsburgh, Pennsylvania, US
Publication Date: 2016 ISBN: 978 1 78536 129 6 Extent: 200 pp
Law and economics are interdependent. Using a historical case analysis approach, this book demonstrates how the legal process relates to and is affected by economic circumstances. Glen Atkinson and Stephen P. Paschall examine this co-evolution in the context of the economic development that occurred in the nineteenth and early twentieth centuries as well as the impact of the law on that development. Specifically, the authors explore the development of a national market, the transformation of the corporation, and the conflict between state and federal control over businesses. Their focus on dynamic, integrated systems presents an alternative to mainstream law and economics.

More Information
Critical Acclaim
Contents
More Information
Law and economics are interdependent. Using a historical case analysis approach, this book demonstrates how the legal process relates to and is affected by economic circumstances. Glen Atkinson and Stephen P. Paschall examine this co-evolution in the context of the economic development that occurred in the nineteenth and early twentieth centuries as well as the impact of the law on that development. Specifically, the authors explore the development of a national market, the transformation of the corporation, and the conflict between state and federal control over businesses. Their focus on dynamic, integrated systems presents an alternative to mainstream law and economics.

The authors apply John R. Commons’s approach to three main law and economics issues: the changing relationship between corporations and the state, the application of the Commerce Clause and the Fourteenth Amendment of the US Constitution to state and federal regulation of business, and the relationship of antitrust law to industrialization. They provide a valuable linking of law with changing economic circumstances such as antitrust policy changes and the development of the corporate form.

This analytical approach to the practice of law and economics will be of interest to researchers, students, and faculty in law and economics, economic history, constitutional law, economic regulation, public policy, and the sociology of law. Business students and researchers will also find value in this book’s presentation of court decisions and exploration of economic development.

Critical Acclaim
‘The global financial crisis of 2007–2008 was a wake-up call to all who study and practice in the field of law and economics: traditional approaches are simply inadequate for understanding the co-evolution of the economic and legal systems, and that inadequacy can result in missed opportunities to warn of impending social harm. Atkinson and Paschall demonstrate the value of an alternative approach – law and economics from an evolutionary perspective – that builds on the work of John R. Commons, a leading figure in the field nearly a century ago. In the process, they offer an eye-opening historical account of the role of the state in the economy and provide a vital starting point for future policy discussions.’
– Charles J. Whalen, author of Financial Instability and Economic Security after the Great Recession

‘This is a remarkable book that makes significant contributions to a new understanding of the co-evolution of law and economics – accomplished with an extensive overview that is evidence rich. It integrates previously unexplored connections between law and economics that include everything from the ultra vires principle to technological advancement in a manner that demonstrates that neither law nor economics can be understood separately. Further consequences are an advancement in the scholarship of evolution in the social sciences and a demonstration of real-world abductive reasoning from the back-and-forth of institutions to change beliefs for the economy through changes in law.’
– F. Gregory Hayden, University of Nebraska–Lincoln, US

‘The language of court documents is notably difficult to understand for people with no legal training. The present volume, a product of fruitful collaboration between a university professor and a lawyer, offers valuable assistance in translating US Supreme Court decisions made in the span of the nineteenth and twentieth centuries with respect to economic disputes into the language spoken by evolutionary and institutional economists. As the authors persuasively show, law and economics co-evolve. A much-needed follow-up to and development of John Commons’s Legal Foundations of Capitalism!’
– Anton Oleinik, Memorial University of Newfoundland and Labrador, Canada and the Central Economics and Mathematics Institute, Russia

‘Bravo! This is the best book on the interaction of law and economics since John R. Common’s Legal Foundations of Capitalism (1924) and in many respects it is a better book. Glen Atkinson (a distinguished economist) and Stephen P. Paschall (a distinguished attorney) have combined their considerable experience, knowledge, and skills to produce a book that will become a classic. Understanding how law and economics interact and change together is essential to understanding nearly all contemporary economic, political, and social issues. Read this book.’
– James Peach, New Mexico State University, US

‘An indispensable history of business law and regulation, alongside a powerful theory of law and the courts. Glen Atkinson and Stephen P. Paschall give us an evolutionary casebook for the twenty-first century, deeply rooted in the ideas of Veblen, Commons, and other masters of the tradition.’
– James K. Galbraith, The University of Texas at Austin, US

‘Building on John R. Commons, the authors show how judge-made law and dispute resolution in England and the US have contributed to the evolving legal supports and working rules of capitalism. Common law and working rules are not natural or optimal. They are human-made traditions handed down to us by centuries of collective action, not by the invisible hand of God. These traditions are what we make of them, nothing more but nothing less either: the future, like the past, is shifting and contested terrain.’
– William M. Dugger, The University of Tulsa, US

Contents
Contents: 1. Evolutionary Method in Law and Economics 2. Causes and Consequences of the Widening of the Market: A Case of Cumulative Economic Evolution 3. The Corporate Form and the State 4. Interstate Commerce and State Regulation of Business 5. Interstate Commerce and Federal Regulation of Business 6. John R. Commons and Co-Evolution of Law and Economics Index