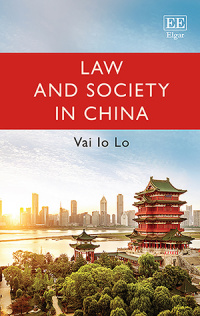 Law and Society in China

9781785363085 Edward Elgar Publishing
Vai Io Lo, Professor of Law, Bond University, Australia
Publication Date: 2020 ISBN: 978 1 78536 308 5 Extent: 256 pp
Law and Society in China examines the interplay between law and society from imperial to present-day China. This synoptic book traces the developments of law in Chinese societies, investigates the role of law in social governance, and discusses China’s ongoing reforms towards the rule of law with Chinese characteristics. In fostering a comprehensive, rather than piecemeal and disconnected, understanding of the interaction between law and society in China, this book will reduce misconceptions about and enhance appreciation for Chinese law.

More Information
Critical Acclaim
Contents
More Information
Examining the interplay between law and society from imperial to present-day China, this synoptic book traces the developments of law in Chinese societies. Vai Io Lo investigates the role of law in social governance, discussing China’s ongoing reforms towards the rule of law with Chinese characteristics.

Offering a comprehensive overview of the interaction between law and society in China, this book simultaneously provides a glimpse of China in terms of history, polity, society, economy and philosophy. Opening with a discussion on what ‘law’ and ‘society’ are, Lo frames the discussion within the contexts of imperial China, the transitional period, the pre-reform era, and finally contemporary China.

Utilising up-to-date analyses and Chinese characters alongside key concepts explained in English, this book will be beneficial to Chinese studies and Chinese law scholars looking for a more integrated insight into the background behind contemporary Chinese law. Legal practitioners working in the field will also find this book an important reference.


Critical Acclaim
‘The scope of Lo’s study is vast, beginning with early imperial China and extending all the way to the contemporary reform period. In covering that ground, Lo touches on traditional political philosophy, semi-colonial legacies, state-building, Maoism, China’s international relations, and the prerequisites of capitalism, to name a few themes – all of the ways in which law is imbricated with the complex reformulations of Chinese society. Law and Society in China can therefore serve as a helpful resource for students and scholars.’
– Matthew Erie, Modern Law Review

‘Seeking to capture the essence of nearly four thousand years of law in China in a single monograph is a daunting challenge. Dr. Vai Io Lo has succeeded admirably. She has produced a rich, insightful, and eminently readable account that traces the development of law, both formal and informal, and the reciprocal interrelationship between law and society in China, from the dynastic era to the present.’
– Daniel H. Foote, The University of Tokyo, Japan

‘In short, Law and Society in China is a remarkable work. Comprehensive in scope but with astonishing clarity, Professor Lo provides her readers with an historical work that provides an unsurpassed introduction to Chinese law and society.’
– John O. Haley, Washington University in St. Louis, US

‘A true tour de force! No other book covers the entire history of Chinese legal system from a distinctively law-and-society perspective. Everybody who wants to gain a deeper and broader understanding of the Chinese legal system which goes beyond a particular area of contemporary Chinese law should read this book.’
– Setsuo Miyazawa, Kobe University, Japan, and Immediate Past President, Asian Law & Society Association
Contents
Contents: 1. The analytic lens 2. Law in imperial China 3. Law in transitional China 4. Law and politics in pre-reform China 5. Reform and law in contemporary China 6. The ‘rule of law’ with Chinese characteristics 7. Conclusions Index

The Governance of Criminal Justice in the European Union

The Elgar Companion to the International Criminal Court