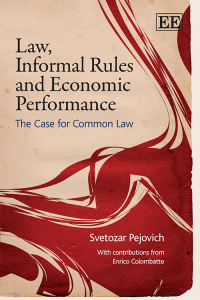 The Case for Common Law

9781845428730 Edward Elgar Publishing
Svetozar Pejovich, Professor Emeritus, Texas A&M University, US, Honorary Doctorate, University of Belgrade, Serbia and Professor of Law and Economics, University of Donja Gorica, Montenegro; with contributions from Enrico Colombatto, Professor of Economics, School of Economics, University of Turin, Italy
Publication Date: 2008 ISBN: 978 1 84542 873 0 Extent: 192 pp
Capitalism has outperformed all other systems and maintained a positive growth rate since it began. Svetozar Pejovich makes the case within this book that a major reason for the success of capitalism lies in the efficiency-friendly incentives of its basic institutions, which continuously adjust the rules of the game to the requirements of economic progress. The analysis throughout is consistent and is supported by evidence. Key components of the proposed theory are the rule of law, the market for institutions, the interaction thesis, the carriers of change, and the process of changing formal and informal institutions.

More Information
Critical Acclaim
Contents
More Information
Capitalism has outperformed all other systems and maintained a positive growth rate since it began. Svetozar Pejovich makes the case within this book that a major reason for the success of capitalism lies in the efficiency-friendly incentives of its basic institutions, which continuously adjust the rules of the game to the requirements of economic progress. The analysis throughout is consistent and is supported by evidence. Key components of the proposed theory are the rule of law, the market for institutions, the interaction thesis, the carriers of change, and the process of changing formal and informal institutions.

This book will be of great interest to academics and students of law and economics, new institutional economics, comparative systems and public choice throughout the world and especially in East Asia and South America where institutional issues are being debated.
Critical Acclaim
‘Almost everyone will gain something of value from reading this book. For those who work in the new institutional economics, Pejovich provides a thoughtful treatment of how common-law and civil-law systems affect personal freedoms and rule of law. The book’s larger market, however, will comprise educated lay readers, who will gain a deeper appreciation of the foundations of capitalism in the developed world and of the dynamics of interrelated institutional and economic change.’
– Lee J. Alston, The Independent Review

‘. . . a well written, easily read book which casts light on many aspects of law and on questions which are or should be debated in our law schools. . . well laid out and presented. . . Its subject matter makes it essential reading for all those studying comparative law and of course law and economics and even for those studying legislation. It would be more than useful for those engaged in property law, the law of contract and administrative and public law. In other words it would be useful and challenging reading for just about all law teachers and students as well as practitioners who wish to think about the basics of what they are doing. Its easy combination of history, comparative technique, legal fundamentals and economics with no maths would even make it an excellent reader for LAWS 101.’
– Bernard Robertson, New Zealand Law Journal

‘Professor Pejovich has written an impressive lot on comparative economic systems, institutions, policies and broader social aspects of economic development. . . His long work in the field quite predictably made him able to present his views and findings in an ever clearer, more orderly and more profoundly argued way. . . This is one of the rare books in which the author is well aware of what he is talking about and makes sure that the same goes for his readers.’
– Ljubomir Madzar

‘Professor Pejovich has ranged expertly across such seemingly disparate areas as legal systems, culture, economics and public choice theory to give us a thoroughly convincing roadmap for a nation’s economic success. The rule of law, enforcement of private contracts, private property rights and an independent judiciary are the basic building blocks. But the common law system, as compared to the civil law system emanating from the European continent, also gets a lot of the credit. This is an erudite, yet happily readable work that takes a lot of the mystery out of differential economic performance among nations.’
– Henry G. Manne, George Mason University School of Law, US

‘Written by one of the pioneers of modern property rights economics this book provides a most insightful, well readable and engaged discussion of the institutional foundations of the Western free enterprise system and the reason for its success, with a special emphasis on the differences between common law and civil law institutions. Readers will especially appreciate the many instructive examples and court cases that serve to illustrate the general argument.’
– Viktor J. Vanberg, Universitaet Freiburg, Germany

‘This is a must-read for anyone who wants to understand why Western capitalism has outperformed all other economic systems. Professor Pejovich explains how the institutions of capitalism, especially those based on common law, make for excellence, even in comparison with Western civil law countries. He presents a compelling theory of how systems evolve through the interactions of formal and informal institutions, an analysis that has deep significance for economic reform proposals throughout the world.’
– John H. Moore, Grove City College, US

‘There are many books on the virtues of capitalism and capitalism as a moral system. Steve Pejovich avoids that mistake. Capitalism, for him, is a system based on human behavior. It survives because it meets the needs that individuals face and provides opportunities that individuals are able to accept. Unlike the utopian visions that have competed against capitalism, it does not impose the vision of a self-selected group. It responds to the desires and wishes of real people most of whom find satisfaction in the way the system works for them. Pejovich traces the behavior of the system back to its roots in methodological individualism. In an excellent development he brings the philosophical into its relation to the economic.’
– Allan Meltzer, Carnegie Mellon University, US

‘In Law, Informal Rules and Economic Performance, Svetozar Pejovich presents a unique juxtaposition of economics, political science, history and the theory of institutional change to explain the wealth of nations. The book is brilliantly convincing in arguing that individual rights rather than state control are responsible for the historical growth and prosperity of successful nations. Indeed, Pejovich goes further to argue that the only route to collective prosperity is through individual rights and freedom.’
– Thomas Saving, Texas A&M University, US
Contents
Contents:

PART I: BASIC ECONOMIC CONCEPTS
1. The Game and the Rules of the Game

PART II: TRANSFORMATION OF THE MEDIEVAL COMMUNITY INTO MODERN SOCIETY: THE RISE OF CLASSICAL LIBERALISM, THE RULE OF LAW AND CAPITALISM
3. From the Middle Ages to Capitalism

4. Capitalism and the Rule of Law
Appendix: Afraid to be Free: Dependency as Desideraturm
James M. Buchanan

5. The Law of Contract and the Judiciary

6. The Economic Functions of the Constitution

9. The Rule of Law and Capitalism: An Overview

PART III: TOWARD A THEORY OF INSTITUTIONAL CHANGE
10. The Method of Analysis

12. The Carriers of Change: The Role of Entrepreneurs

14. Informal Institutions or Cultural Traditions: The Role of Pathfinders

15. Efficiency-Friendly Institutional Change within the Structure of Tradition