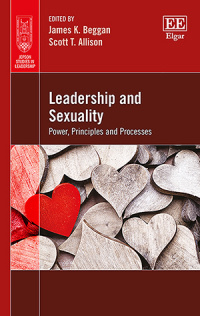 9781786438645 Edward Elgar Publishing
Jepson Studies in Leadership series
Edited by James K. Beggan, Department of Sociology, University of Louisville and Scott T. Allison, Department of Psychology, University of Richmond, US
Publication Date: 2018 ISBN: 978 1 78643 864 5 Extent: 256 pp
Although both leadership and sexuality are important and heavily researched topics, there is little work that addresses the interaction of the two areas. Leadership and Sexuality: Power, Principles, and Processes is a scholarly synthesis of leadership principles with issues related to sexuality and sexual policy-making. The authors’ multi-disciplinary analysis of the topic examines sexuality in the context of many different kinds of leadership, exploring both the good and the bad aspects of leadership and sexuality.

These integrated topics are examined through three broad areas of study. The first involves individuals who become leaders in sexual domains by advancing new views of human sexuality. The second involves problems that leaders of businesses and other institutions must address as a result of issues related to human sexuality, including sexual harassment and sexually-based discrimination in the workplace. The third area involves understanding how being a leader influences sexual desire and sexual attraction, and may impact the course of workplace romance and the expression of sexuality.

Written to be accessible to both laypeople and scholars, this book will appeal to academics and scientists interested in human sexuality as well as many related disciplines, including psychology, sociology, leadership studies, heroism science, political science, religion, and economics.
Critical Acclaim
‘The chapters in this excellent edited volume illuminate what is often overlooked: leadership's sexual side. From the leaders of the sexual change and transformation movements, to those who inflict their heternormative biases on others, to the inappropriate, immoral, and illegal sexual missteps of so many leaders, there is much to be gained by examining, explicitly, the sexuality of leadership. Leaders and leadership are fascinating topics, but add a dash of sex, and they become all the more intriguing.’
– Donelson R. Forsyth, University of Richmond, US

‘The interplay between sexuality and leadership is a provocative topic that people tend to give a wide berth to, like a gorilla in a room. Not surprisingly, Jim and Scott climb on the gorilla, and bring along some collaborators to show us what can happen when leaders shy away from confronting sexuality-based issues within the group, or misinterpret the sexual intent of a behavior, and draws on real-world events many of us would like to forget. Far from sensational, this volume gives us the opportunity to move past the skittishness and finally address sexuality as an influence on social behavior.’
– Craig Parks, Washington State University, US

‘Beggan and Allison’s edited book fills the void created by the neglect of scholarship on the links between sexuality and leadership. In this collection of chapters written by social scientists from several fields, authors explore multiple ways in which leadership and sexuality can be related, including, for example, some leaders’ sexual abuse of others and the sexuality implications of social dancing. I can’t think of an edited book on leadership with a more fascinating and unusual set of chapters.’
– Alice Eagly, Northwestern University, US

‘With their fascinating synthesis of two fields of study, leadership and sexuality, editors James Beggan and Scott Allison provide a forum for scholars to investigate two concepts that have long shaped human behavior and captured both academic interest and the curiosity of the general public. In addition to its appeal to academics, this cross-disciplinary book will interest anyone who has ever had a boss, been on a date, or contemplated an office romance.’
– Robert Giacalone, John Carroll University, US
Contributors
Contributors: S.T. Allison, J.K. Beggan, L. Dwight, O. Efthimiou, J. Fyke, S. Huss, K. Lucas, S. Pichler, C. Pitzulo, C. Shakeshaft, W.R. Stayton, M.B. Stone, B. Trisler, E. Turley
Contents
Contents:

Part II Leadership and Sexuality
4. A Failure of Courageous Leadership: Sex, Embarrassment, and (Not) Speaking Up in the Penn State Sexual Abuse Scandal
Jeremy Fyke, Bree Trisler and Kristen Lucas

5. Because They Can: Adult to Student Sexual Abuse in PreK-12 Schools
Charol Shakeshaft

6. Heterosexism in Organizations: The Importance of Transformational and Heroic Leadership
Shaun Pichler

Part III The Sexuality of Leaders
9. “Stupid is as Stupid Does” or Good Bayesian? A Sympathetic and Contrarian Analysis of Bill Clinton’s Decision to Have an Affair with Monica Lewinsky
James K. Beggan

12. Heroic Leadership in The Walking Dead’s Postapocalyptic Universe: The Restoration and Regeneration of Society as a Hero Organism
Scott T. Allison and Olivia Efthimiou