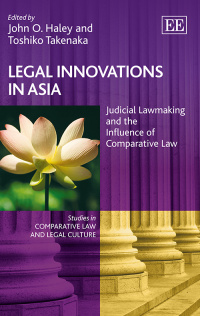 Judicial Lawmaking and the Influence of Comparative Law

Expert scholars from around the world offer a history of law in the region while also providing a wider context for present-day Asian law. The contributors share insightful perspectives on comparative law, the role of courts, legal transplants, intellectual property, Islamic law and other issues as they relate to the practice and study of law in Japan, China, Taiwan, Korea and Southeast Asia.

More Information
Critical Acclaim
Contributors
Contents
More Information
Legal Innovations in Asia explores how law in Asia has developed over time as a result of judicial interpretation and innovations drawn from the legal systems of foreign countries.

Expert scholars from around the world offer a history of law in the region while also providing a wider context for present-day Asian law. The contributors share insightful perspectives on comparative law, the role of courts, legal transplants, intellectual property, Islamic law and other issues as they relate to the practice and study of law in Japan, China, Taiwan, Korea and Southeast Asia.

Students and scholars of Asian law will find this a timely and fascinating read, as will legal practitioners and colleagues of the Asian Law Center.
Critical Acclaim
'Armed mainly with tremendous scholarly energy, the University of Washington has developed into the premier center of Asian legal studies in North America. This volume is a tribute to the breadth and depth of activity at the Asian Law Center over its first five decades, and a treasure trove of substantive insights into comparative law in Asia. As Asian law continues to attract more attention around the world, we must all be grateful for the contributions of the innovators who built the field.'
– Tom Ginsburg, University of Chicago Law School, US

‘Professors Haley and Takenaka have put together a wonderfully eclectic collection of essays to commemorate the founding of the Asian Law Center at the University of Washington School of Law in 1964. Written by leaders in their respective fields, the essays, which explore legal developments, innovations and transplants in Japan and its neighbours, will appeal to scholars and students of Japanese law, as well as comparative lawyers with an interest in Asian law.’
– Jean Ho, National University of Singapore

‘For fifty years now, the University of Washington's Asian Law Center has stood at the center of American scholarship on Japanese law. Its scholars have consistently produced the very best work in the field, and men and women associated with it have increasingly turned their attention to other legal systems in Asia as well. In this broad-ranging volume, the contributors explore the intriguing connections among the many legal systems at stake. They have produced a tantalizing blend of analytical depth and geographical breadth.’
– J. Mark Ramseyer, Harvard Law School, US

‘If any publisher can be depended upon to produce books chock full of ground-breaking research on issues pertaining to global law it must be Edward Elgar Publishing. International lawyers, scholars and academics seeking to extend their understanding of key legal systems in the Asia-Pacific region, for example, will therefore applaud this recently published title on ‘Legal Innovations in Asia.’. . . Much is revealed in this fascinating volume and much can be learned from the variety of information and insightful commentary it contains, especially considering the evolutionary – and revolutionary – changes that have taken place, notably in Japan and China over the past half century since the Asian Law Centre was founded. Researchers, scholars and international lawyers seeking further insights into legal developments in Asia should certainly acquire this book.’
– Phillip Taylor MBE and Elizabeth Taylor, The Barrister Magazine

‘Since at least 1980 American universities have taken the lead in publishing articles and books on Asian law in English. This book provides a worthwhile addition to that body of publications.’
– Lawasia Journal

PART II: THE ROLE OF COMPARATIVE LAW IN LEGAL INNOVATIONS
4. Comparison of Law, Transfer of Legal Concepts, and Creation of a Legal Design: The Case of Japan
Harald Baum

6. The Supreme Court of Japan and Online Pharmacies
Shigenori Matsui

9. The Role of Courts in “Making” Islamic Law: South and Southeast Asia
Clark B. Lombardi

10. Limitations on the Termination of Fixed-term Employment Contracts: Judicially Created Rules and Their Codification in Japanese Law
Ryuichi Yamakawa

11. Goddess of Justice Without a Blindfold: How do Japanese Judges Treat Pro Se Litigants?
Kyoko Ishida

15. The Influence of US and Japanese Laws upon Indonesian Law
Kurnia Toha

17. Ethics Rather than Rights: Reconsidering “Transmit Rather than Create”: Toward a New Understanding of Korea’s Intellectual Property Rights Tradition
Hyung Doo Nam

18. What are the Challenges Awaiting the Thai Government if the Bayh-Dole Act is Adopted in Thailand?
Orakanoke Phanraska

19. Public Health and Pharmaceutical Patent Protection in Indonesia: The Implementation of the TRIPS Safeguards and other Strategies to Increase Access to Essential Medicines
Tomi Suryo Utomo