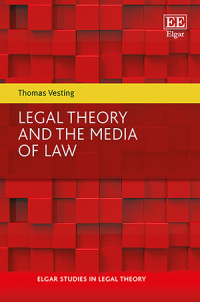 Legal Theory and the Media of Law

9781784711597 Edward Elgar Publishing
Elgar Studies in Legal Theory
Thomas Vesting, Professor for Public Law, Legal Theory and Media Theory, Faculty of Law, Goethe University, Germany
Publication Date: 2018 ISBN: 978 1 78471 159 7 Extent: 656 pp
As many disciplines in the humanities have experienced a focus on culture’s impact in recent decades, questions surrounding the significance of media such as writing, print and computer networks have become increasingly relevant. This book seeks to demonstrate that a media and cultural theory perspective can also be highly productive for legal theory.

More Information
Critical Acclaim
Contents
More Information
As many disciplines in the humanities have experienced a focus on culture’s impact in recent decades, questions surrounding the significance of media such as writing, print, and computer networks have become increasingly relevant. This book seeks to demonstrate that a media and cultural theory perspective can also be highly productive for legal theory.

Thomas Vesting approaches law as an artificial and constructive element within culture and emphasizes the many possibilities that varied forms of media have opened to law, from oral history through to scripture, print and modern day digital networks. While providing historical examples for these theoretical assumptions, the connections between media and law are reconstructed in a practical way and with an eye toward the future. The book closes with an analysis of our present age as a network culture and discusses how this metaphorical framework can be of use in thinking about issues such as constitutionalism, human rights, the state, democracy and education.

Legal Theory and the Media of Law will be of great interest to legal, cultural and media theorists as well as academics of politics, sociology and philosophy.

Critical Acclaim
‘ This book of remarkable erudition was originally written in German as a series of four volumes. Bringing together law, communication and media studies, philosophy of language, anthropology and theory of culture, the author shines a new light on liberal law, its various forms and its evolution.’
– Springer Science+Business Media B.V.

‘What significance does media (e.g. the form and materiality of expression) have for law and legal thought? Covering a hugely impressive historical range – from oral traditions, through the invention of writing and print, to today's computer networks – this new book from Thomas Vesting offers the best guide currently available to that question. Putting in dialogue media theory and legal theory, Vesting does not shy away from the most difficult issues at the intersection of these two fields. The book will be of interest to everyone from book historians to theorists of contemporary mass media. An impressive achievement.’
– Maksymilian Del Mar, Queen Mary University of London, UK
Contents
Contents: Preface and Acknowledgements PART I LANGUAGE AND SPEECH I. Introduction: Legal Theory as Media Theory 2. Language, Media, Subjectivity 3. On the Orality of Oral Cultures 4. Oral Legal Culture and the “Ethics” of the Gift 5. Traces of Oral Legal Culture in Homer (and Hesiod) PART II WRITING 6. Hot Writing and Cool 7. Tradition and Innovation in Writing Cultures 8. Transitions to Writing in Law 9. Specialist Writing: Roman Civil Law 10. The Comprehensive Text of Jewish Law PART III PRINT 11. The Parchment Codex and the “Spirit” of Christianity 12. Print Culture, Print Epistemology 13. “Incarnation” of Sovereignty 14. “Excarnation” of Sovereignty 15. The Cultural Framework of the Liberal State PART IV COMPUTER NETWORKS 16. Mass Media and Mass Culture 17. The Culture and Epistemology of Networks 18. Constitutionalism 19. Statehood and Democracy 20. Further Exemplary Fields Bibliography Index