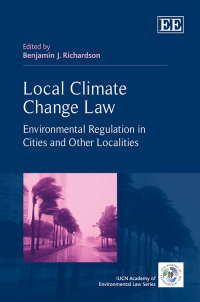 Environmental Regulation in Cities and Other Localities

This timely study offers a multi-jurisdictional perspective, featuring international contributors who examine both theoretical and practical dimensions of how localities are addressing climate mitigation and adaptation in Australia, Canada, China, Europe, South Africa and the United States, as well as considering the place of localities in global climate law agreements and transnational networks.

Written from a multi-disciplinary perspective, this book will appeal to academics, post graduate and undergraduate students in law and political science, local and national government policy makers and politicians, as well as practising local government lawyers. Anyone with a general interest in environmental issues will also find much to interest them in this insightful study.
Critical Acclaim
‘This book is a useful addition to our literature on climate change law, with its focus on climate change at the local level. It examines how local governments, municipalities and city authorities address climate change through law and policy, and the problems/constraints faced in mitigation and adaptation at the local level. The 15 contributors have thoughtfully and critically analysed the issues from intellectual as well as practical perspectives, drawing on the experiences of North America as well as the EU, China, Australia and South Africa. The reader is left with deeper insights and suggestions for the way forward.’
– Irene Lin Heng Lye, National University of Singapore

‘This volume offers a thorough exploration of the challenges and opportunities for local governments in many parts of the world to mitigate and adapt to climate change.’
– Laura Watchmann, LEED AP-ND, Executive Director, NALGEP

‘As the international climate consensus is fading, the focus has shifted from the global to the local. This book is timely and ground-breaking as it frames a new subject of legal study and proves the dramatic surge of local climate action. A must-read.’
– Klaus Bosselmann, University of Auckland, New Zealand

7. Climate Governance at the Municipal Level in Canada: A Case Study of Mitigation Efforts in Halifax
Meinhard Doelle and Kaija Belfry Munroe

12. Legal Frameworks for Local Adaptation in Australia: The Role of Local Government in Water Governance in a Climate Change Era
Lee Godden