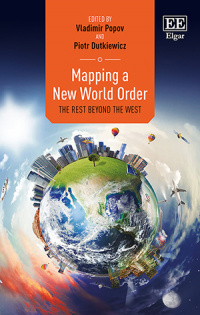 The Rest Beyond the West

9781786436474 Edward Elgar Publishing
Edited by Vladimir Popov, Central Economics and Mathematics Institute, Moscow, Russia and Piotr Dutkiewicz, Political Science Department, Carleton University, Canada
Publication Date: 2017 ISBN: 978 1 78643 647 4 Extent: 232 pp
This book identifies possible factors responsible for the recent rise of many developing countries. It examines how robust these trends actually are and speculatively predicts the implications and consequences that may result from a continuation of these trends. It also suggests possible scenarios of future development. Ultimately, it argues that the rise of ‘the Rest’ would not only imply geopolitical shifts, but could lead to proliferation of new growth models in the Global South and to profound changes in international economic relations.

More Information
Critical Acclaim
Contributors
Contents
More Information
China is beginning to overtake the US as the world’s largest economy, and a few other East and South Asian countries are steadily increasing their presence in global markets. The authors of this book agree that the contours of a ‘different’ economic and political order are emerging as the West is effectively struggling to hold onto its global pre-eminence. Meanwhile, the torch is slowly (albeit uncertainly) passing to a new generation of international players. Some version of a new multilateral order is emerging; an order that is both different from the previous one, but also marked by multiple and significant continuities.

This book identifies possible factors responsible for the recent rise of many developing countries. It examines how robust these trends actually are and speculatively predicts the implications and consequences that may result from a continuation of these trends. It also suggests possible scenarios of future development. Ultimately, it argues that the rise of the 'Rest' would not only imply geopolitical shifts, but could also lead to proliferation of new growth models in the Global South and to profound changes in international economic relations.

This innovative book is written from a multicultural and multidisciplinary perspective by leading scholars in the field. It will appeal to professionals, PhD students and graduate students alike, namely those in the fields of international relations, political economy, political science, international development and regional studies.

Critical Acclaim
‘The discussions in this book are interesting, thought-provoking, and well-written. The book would be an excellent choice for an undergraduate or graduate student working to better understand current international relations—particularly following the succession of the post-Cold War world and the theories surrounding the complexities of a multi-polar world. The book would also be a great choice for an individual hoping to learn more about the current state of international politics.’
– Allison G.S. Knox, International Social Science Review

‘Despite the book’s several chapters being written by different authors with many and varied views and perspectives, it is coherent and fascinating to read. . . The intended readers are graduate and PhD students, as well as professionals in development studies and related fields, who should find this book a compelling proposition that answers many questions but raises even more.’
– Hungarian Geographical Bulletin

‘This book, edited by Vladimir Popov and Piotr Dutkiewicz, with contributions from an array of well-known scholars and former policy-makers, is an important contribution to understanding critical issues of our time: will convergence between the west and "the rest" accelerate in the 21st century? Can convergence come to a halt? How can global and regional institutions accommodate the irruption of new world economic powerhouses? Do neoliberalism and structural development theories provide appropriate conceptual and policy responses for a rapidly changing world order? This book offers useful insights, historical evidence and prospective scenario analysis to address these important questions. I strongly recommend it.’
– Andres Solimano, International Center for Globalization and Development, author of Global Capitalism in Disarray

‘This book, written by leading specialists in the economics of catch-up development, makes a fresh and important addition to the literature on the subject. The authors introduce readers to a discussion of the most important problems of our modernity. They analyze a complicated picture of the rising “Rest”, including China and India, Russia and Latin America, trying to understand the consequences of the current economic trends and outline a way to the more harmonized new world order.’
– Victor Polterovich, Central Economics and Mathematics Institute, Russia

6. Global “disorder” and the rise of finance: Implications for the development project
Jayati Ghosh

9. Russia and the European Union: the Clash of World Orders
Richard Sakwa

11. The Rest beyond the West - Conclusions
Piotr Dutkiewicz