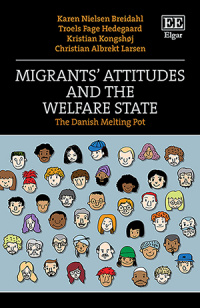 Migrants’ Attitudes and the Welfare State

More Information
Critical Acclaim
Contents
More Information
Analysing two major surveys of 14 different migrant groups connected to Danish register data, this insightful book explores what migrants think of the welfare state. It investigates the question of whether migrants assimilate to the ideas of extensive state intervention in markets and families or if they retain the attitudes and values that are prevalent in their countries of origin.

The authors examine what various migrant groups from countries including Poland, Romania, Spain, the UK, China, Japan, Turkey, Russia, the US, Pakistan, Lebanon, Iraq and the former-Yugoslavia living in Denmark think about the trustworthiness of state institutions, state responsibility, economic redistribution, female employment and childcare. Chapters also cover the key issues of national identification, social trust and welfare nationalism. Concluding that migrants from diverse backgrounds assimilate well into the welfare attitudes, norms and values of the Danish people in several areas, the book points to the potential assimilative impact of the welfare state.

Incorporating new theoretical discussions, this book will be critical reading for academics and students studying migration and welfare states. It will also be a useful resource for comparative migration researchers interested in the impact of the host country context on migrants’ assimilation patterns.

Critical Acclaim
‘Fascinating. This innovative book tracks migrants’ rapid adoption of Danish values on the welfare state. This transition is not primarily the result of self-interest or socialization processes. Rather, welfare state institutions themselves change attitudes by generating new opportunity structures, new experiences and new perceptions of how Danish society works. This is a fundamentally optimistic story about the integrative power of welfare state institutions. A story with relevance far beyond Danish borders.’
– Keith Banting, Queen's University, Canada

‘The question of whether immigration is compatible with a robust welfare state has received much attention in recent times. However, the extent to which immigrants in welfare states share the welfare attitudes of natives, and to which welfare regimes may foster immigrant assimilation to such attitudes, are issues that have been rather neglected. This book addresses these questions by providing a most thorough analysis of the case of Denmark. It is highly recommended to scholars working on immigration and on the future of the welfare state.'
– Nils Holtug, University of Copenhagen, Denmark

Welfare State Legitimacy in Times of Crisis and Austerity