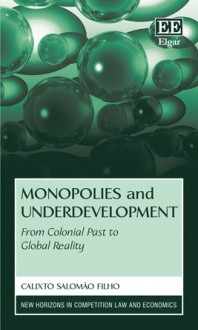 From Colonial Past to Global Reality

9781784718725 Edward Elgar Publishing
New Horizons in Competition Law and Economics series
Calixto Salomão Filho, Professor of Law, University of São Paulo Law School, São Paulo, Brazil and Professor, the Institut d’études Politiques de Paris (Sciences Po), France
Publication Date: 2015 ISBN: 978 1 78471 872 5 Extent: 192 pp
This ambitious analysis is centered on the evolution of economic structures in colonized economies, showing the effects of these structures on today’s global reality for all economies, whether they are considered ‘developed’ or ‘underdeveloped.’ The result is an illuminating study of historical restriction and exploitation and its impact on present day markets around the world.

More Information
Critical Acclaim
Contents
More Information
This ambitious analysis is centered on the evolution of economic structures in colonized economies, showing the effects of these structures on today’s global reality for all economies, whether they are considered ‘developed’ or ‘underdeveloped.’

With a comprehensive scope encompassing economic structures and their influence on the growth of nations from past to present, Calixto Salomão Filho delves into issues of development, economic structures, social problems, monopolies, globalization, and poverty. This book features a unique combination of economic and legal analysis of development, including the examination of underdevelopment trends based on monopoly growth and the triple drain effects of monopolies on national economies. The result is an illuminating study of historical restriction and exploitation and its impact on present day markets around the world.

Monopolies and Underdevelopment will capture the interest of scholars and readers of the economic theory of development, economic history of underdeveloped countries, and law and development; as well as those involved in Latin American and South Asian studies, international comparative law, and legal history.

Critical Acclaim
‘This extraordinary book proposes a new theory of colonization and of its economic effects in leading to continued underdevelopment of formerly colonized countries. It brilliantly attributes those effects to a simple source: colonial monopolization that systematically affected consumers, labor, and related industries, creating a structure of domination that continues today. The book is comparable to Thomas Piketty’s best-selling Capital in the 21st Century, but substantially goes beyond and is deeper than Piketty because it explains the economic and structural forces leading to increasing inequality. The book also shows that these same forces are affecting modern economies which will inhibit development into the future. It should be read by all interested in the economic and social effects of colonialism as well as by all interested in the economic future of the world.’
– George L. Priest, Yale Law School, US

‘This bold, original and learned book proposes what might be termed a global, interdisciplinary theory of poverty. It identifies the cause of under-development of impoverished economies in the structural concentration of economic power inherited from their colonial past, then goes on to show how various fields of knowledge (economics, but also law, philosophy and the social sciences) still work today to support the same monopolistic socio-economic structures. Drawing lessons from this analytical framework, it offers a series of ideas for transformative action. In this respect, it provides highly instructive – if sobering – reading while also offering a remarkable methodological model for future research on issues which might be described as global justice.’
– Horatia Muir Watt, Sciences Po Law School, France

Contents
Contents: Introduction: From Colonial Past to Global Reality Part I The “March of Acceptance”: Economic Power in the History of Ideas 1. The Philosophical View 2. The Economic View 3. The Legal View Part II Monopolies and the History of Capitalism 1. Colonial Monopoly and Underdevelopment 2. Industrialization and Continuity of Monopolistic Structures 3. Internationalization of Economic Relations and the Internationalization of Monopolies Part III - Conclusion: The End or Beginning of History? Index