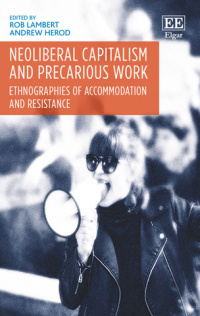 Ethnographies of Accommodation and Resistance

9781788115254 Edward Elgar Publishing
Edited by the late Rob Lambert, formerly The University of Western Australia and Andrew Herod, Distinguished Research Professor of Geography and Adjunct Professor of International Affairs and of Anthropology, University of Georgia, US
Publication Date: 2017 ISBN: 978 1 78811 525 4 Extent: 352 pp
Since the renaissance of market politics on a global scale, precarious work has become pervasive. Divided into two parts, the first section of this cross-disciplinary book analyses the different forms of precarious work that have arisen over the past thirty years. These transformations are captured in ethnographically orientated chapters on sweatshops; day labour; homework; unpaid contract work of Chinese construction workers; the introduction of insecure contracting in the Korean automotive industry; and the insecurity of Brazilian cane cutters. The editors and contributors then collectively explore trade union initiatives in the face of precarious work and stimulate debate on the issue.

More Information
Critical Acclaim
Contributors
Contents
More Information
With the renaissance of market politics on a global scale, precarious work has become pervasive. This edited collection explores the spread across a number of economic sectors and countries worldwide of work that is invariably insecure, dirty, low-paid, and often temporary and/or part-time.

Critical Acclaim
‘The anthology’s backbone is its ethnographic perspective that allows the reader to follow the articles not only from the particular circumstances of specific workers to international webs of relationships, but also to the impact of neoliberal capitalism on the very Earth itself. This switch in perspective is necessary for ethnography to expand beyond a collection of local experiences to highlighting similar conditions upon which to build solidarity. Geographically diverse, representing research from five continents, the authors do an outstanding job of relating how precarity impacts workers in a myriad of ways that are both relatable and situated in their own contexts. . . . All social scientists and students can benefit from this book, as its multidisciplinary nature calls us to remember that there is no discreet geography without economics, labor, or sociology, and vice versa.’
– Misty Luminais, International Social Science Review