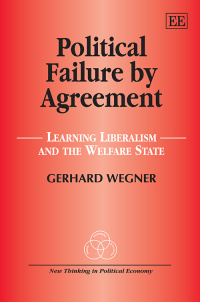 Learning Liberalism and the Welfare State

9781847207340 Edward Elgar Publishing
New Thinking in Political Economy series
Gerhard Wegner, Professor of Economics, Erfurt University, Germany
Publication Date: July 2008 ISBN: 978 1 84720 734 0 Extent: 160 pp
The purpose of this book is to reconsider economic liberalism from the viewpoint of political liberalism. The author argues that advocates of economic liberalism largely overlook empirical political preferences which, in many societies, go far beyond a limited role of the state. Recent difficulties of reforming the welfare state provide evidence that political preferences are at odds with liberal economic policy in numerous cases. This fact challenges a political conception which demands a limited state role but also claims that citizens’ preferences ‘as they are’ should determine the content of policies. Using an evolutionary perspective on economic liberalism, the book develops new arguments about how economic liberalism can be brought into line with political liberalism.

Drawing on an evolutionary theory of markets, Gerhard Wegner reinforces the claim that liberal economic policies are conducive to prosperity in society, but he argues that the liberal promise of prosperity does not translate into corresponding political preferences on the part of citizens. A tension between political and economic liberalism arises which lies at the centre of this book.

Political Failure by Agreement will strongly appeal to postgraduate students and researchers of global governance, political theory, political economy and institutional economics.
Critical Acclaim
‘Gerhard Wegner provides new insight into the relation between democracies and market economies. He recognizes conflict between the two, but he doesn’t propose constitutional controls over political action. Such proposals are grounded in the comparative static manipulation of equilibrium models. In contrast, Wegner advances an evolutionary theory of political economy, and uses this theory to explain how processes of societal learning might be set in motion that could expand support for market arrangements through time. This thoughtful and challenging book will repay examination by all students of political economy.’
– Richard E. Wagner, George Mason University, US

‘In drawing particular attention to the implications of evolutionary market theory for public policy Gerhard Wegner adds a novel and instructive line of argument to the long-standing debate on the inherent tension between democratic politics and economic liberalism. His concept of “learning liberalism” addresses an important dimension of political failure that has been neglected in this debate.’
– Viktor J. Vanberg, Universitaet Freiburg, Germany
Contents
Contents: Preface 1. Preferences for the Welfare State as a Challenge for Economic Liberalism 2. The Liberal Model of Market Order: The Evolutionary View 3. Preferences versus Choice in Politics: A Conception of Feasible Democratic Politics 4. The Underestimation of Political Opportunity Costs 5. Learning Liberalism in the Welfare State: Reviewing Economic Liberalism References Index
Add to Wish List