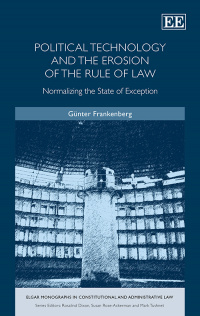 Political Technology and the Erosion of the Rule of Law

Normalizing the State of Exception

9781783472512 Edward Elgar Publishing
Elgar Monographs in Constitutional and Administrative Law
Günter Frankenberg, Goethe University, Frankfurt am Main, Germany
Publication Date: 2015 ISBN: 978 1 78347 251 2 Extent: 320 pp
This timely volume by distinguished scholar Günter Frankenberg offers a sophisticated analysis and sharp critique of the reactions of nations such as the US, Great Britain and Germany to perceived terrorist threats, organized crime actions and other political emergencies that have occurred in recent years.

More Information
Critical Acclaim
Contributors
Contents
More Information
This timely volume by distinguished scholar Günter Frankenberg offers a sophisticated analysis and sharp critique of the reactions of nations such as the US, Great Britain and Germany to perceived terrorist threats, organized crime actions and other political emergencies that have occurred in recent years.

The author demonstrates how governments have increasingly sacrificed the rule of law and human rights for the benefit of security programs – as evidenced by a rise in extraordinary measures such as surveillance, detention and torture – thus normalizing the state of exception and privileging preemptive, proactive and coercive methods of political engineering. An interdisciplinary and multi-jurisdictional study, this book develops and implements a unique theoretical and conceptual framework for understanding the rise of technical-political rationality and the fall of the rule of law, and submits both to a firm critique.

Particularly relevant in light of current controversies, this provocative book will appeal to scholars and students of international and constitutional law, legal theory, political science, and terrorism studies.
Critical Acclaim
‘Books abound on the question whether states of emergency can be legally controlled. But Frankenberg’s account stands out because of his mastery of the political and legal contexts in which the terms of the debate about states of emergency were framed for us – the situation of Weimar and the constitutional reaction in postwar Germany. In addition, Frankenberg has an astonishing command of the history of political theory from Hobbes to the present. His innovative but scholarly analyses permit him to construct a narrative about the potential of the rule of law to respond to emergencies that includes detailed examinations of Schmitt, Foucault, Habermas, Agamben, and many others. His treatments of these figures seek to draw out the genuine insights they might offer, so that, even though none of the figures escapes the force of his criticism, his argument will challenge the assumptions of all involved in the debate.’
– David Dyzenhaus, University of Toronto, Canada
Contributors

Contents
Contents: Preface 1. A Critique of Political Technology 2. Visions of Political Technology 3. Constellations of Law-Rule and the State of Exception 4. The State of Exception as Mindset and Doctrine 5. Political Extremism and the Militancy of Law-Rule 6. Normalizing the State of Exception: Counter-Terrorism and ‘Whatever it Takes’ 7. Normalizing Torture as a Technique of Governing: What the ‘Exigencies of War’ Demand? Afterword
Add to Wish List
eBook for individuals
978 1 78347 252 9
From $37.56
Click here for options
eBook for library purchase
978 1 78347 252 9
View sample chapter and check access on: