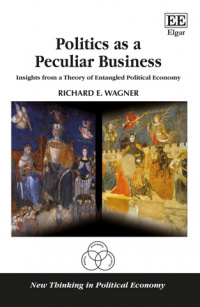 Insights from a Theory of Entangled Political Economy

9781785365478 Edward Elgar Publishing
New Thinking in Political Economy series
Richard E. Wagner, Emeritus Professor of Economics, George Mason University, US
Publication Date: 2016 ISBN: 978 1 78536 547 8 Extent: 256 pp
Economists typically treat government as something outside the business realm, a sort of ‘Lord of the Manor’. Richard Wagner argues that this is the wrong approach and can ultimately be destructive to capitalism and to society.

More Information
Critical Acclaim
Contents
More Information
Economists typically treat government as something outside the business realm, a sort of ‘Lord of the Manor’. Richard Wagner argues that this is the wrong approach and can ultimately be destructive to capitalism and to society.

Critical Acclaim
‘Where most scholars examine the effectiveness of individual parts of society, few besides Wagner explore the interaction of those constituent parts and how those parts come together to form the entire system. To my mind, perhaps the most important contribution of the Wagnerian approach is the recognition that even in a world where each individual part of the state works perfectly fine for its purposes, the emerging public policy can fail to generate the desired outcome because of an incongruence at the systems level.’
– David J. Hebert, Review of Austrian Economics

‘Political competition, like market competition, is a discovery process. But politics involves many people paying different costs to settle on one outcome, where markets involve many people responding in different ways to a single market price. As Wagner points out in this lively book, the two processes are “entangled,” so analyses that separate politics and markets mislead. Worse, politics have ensnared markets, as mechanisms created to protect economic liberty increasingly promote political control instead. Politics in the US is a business, a peculiar business. And Wagner’s book is a profound step toward understanding the reasons, and implications, of this fact.’
- Michael C. Munger, Duke University, US
Contents
Contents: 1. Public Choice and the Virginia Tradition of Political Economy 2. Alternative Paths for a Theory of Political Economy 3. Systems Theory and Parts-to-whole Relationships 4. The Logic of Economizing Action: Universal Form and Particular Practice 5. Reason, Sentiment, and Electoral Competition 6. Parasitical Political Calculation 7. Societal Tectonics and the Art of the Deal 8. Moral Imagination and Constitutional Arrangement Index