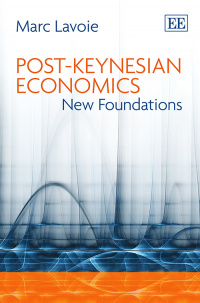 More Information
Critical Acclaim
Contents
More Information
Mainstream economic theory has been increasingly questioned following the recent global financial crisis. Marc Lavoie shows how post-Keynesian theory can function as a coherent substitute by focusing on realistic assumptions and integrating the financial and real sides of the economy. This book outlines alternative microeconomic foundations based on a world of fundamental uncertainty, with an emphasis on various paradoxes that arise in a truly macroeconomic analysis.

The book is a considerably extended and fully revamped edition of the highly successful and frequently cited Foundations of Post-Keynesian Economic Analysis. It provides an exhaustive account of post-Keynesian economics and of the developments that have occurred in post-Keynesian theory and in the world economy over the last twenty years. Topics covered include open-economy issues, the methodological foundations of heterodox economics, consumer theory, firms and pricing, money and credit, effective demand and employment, inflation theory, and growth theories.

Students and scholars of economics, particularly post-Keynesian and heterodox economics, will find this comprehensive look at the field a necessary addition to their libraries.

'This textbook by Lavoie is an updated version of his earlier work and deserves to be read by anyone who wants to understand alternative perspectives to neoclassical thinking. The references are varied and given readers a solid foundation for continuing their education in economics.'
– R.H Scott, Choice

‘This book is extremely informative on current Post-Keynesian views broadly deﬁned. It does not advance the debate on the validity of the most characteristic Post-Keynesian ideas, but it usefully shows where agreement is strong, and where on the contrary (especially on income distribution, and on investment and growth) views are highly divergent and further research and debate are needed.’
– Fabio Petri, Review of Political Economy