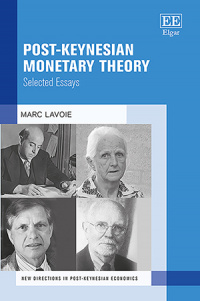 More Information
Critical Acclaim
Contents
More Information
Post-Keynesian Monetary Theory recaps Marc Lavoie's views on monetary theory over a 35-year period, seen from a post-Keynesian perspective. The book contains a collection of twenty previously published papers, as well as an introduction which explains how these papers came about and how they were received. All of the selected articles avoid mathematical formalism.

Readers will find analyses of the earlier advocates of endogenous money such as Nicholas Kaldor and Jacques Le Bourva. They will discover how the arguments in support of the post-Keynesian theory of endogenous money and the credit view of banking have evolved through this 35-year period, and how they have been related to the new procedures pursued by central banks. All these essays show the relevance of the realistic post-Keynesian monetary theory in understanding the subprime and euro crises, quantitative easing and the distributional role of interest rates.

Within these pages Marc Lavoie provides an overview of what has happened in post-Keynesian monetary economics over the last three and a half decades for students and scholars with interest in monetary economics, the horizontalist-structuralist debates and the recent history of economic thought.

Critical Acclaim
‘This collection of early essays on endogenous money by Marc Lavoie (and some later ones) is of the utmost importance. Marc’s commentary on the essay about Jacques Le Bourva is pivotal – ‘… a theory … [of] … the endogeneity of money is insufficient … one also has to reject the existence of a natural rate of interest …’’
– John Smithin, York University, Toronto and Aurora Philosophy Institute, Canada

The Economics of Blockchain and Cryptocurrency