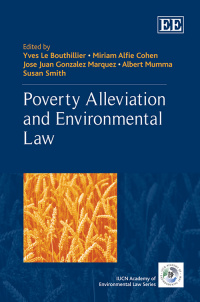 There is every reason to believe that these issues are in many ways interdependent. However this book demonstrates that there are situations where alleviation of poverty and the protection of the environment appear to be in a fraught relationship. The contributing authors illustrate that the role played by law in this relationship, whether at the international or national level, will vary depending on the situation and will be more successful at pursuing environmental justice in some cases than in others.

More Information
Critical Acclaim
Contributors
Contents
More Information
This timely book explores the complex relationship between the alleviation of poverty and the protection of the environment.

There is every reason to believe that these issues are in many ways interdependent. However this book demonstrates that there are situations where alleviation of poverty and the protection of the environment appear to be in a fraught relationship. The contributing authors illustrate that the role played by law in this relationship, whether at the international or national level, will vary depending on the situation and will be more successful at pursuing environmental justice in some cases than in others.

This interdisciplinary study will appeal to academics and students in environmental law and other environmental disciplines, environmental policymakers and NGOs interested in issues of poverty, environment and indigenous peoples.
Critical Acclaim
‘Poverty Alleviation and Environmental Law makes an important contribution. . . taking as its subject the role that law can play at the intersection of anti-poverty and conservation efforts. . . the carefully researched and written chapters offer critical and stimulating insights and detailed analysis of key issues and challenges in this field. Furthermore, for almost every shortcoming they identify, the contributors offer concrete recommendations for developing the applicable laws and policies, making a convincing case that these improvements are not only necessary, but also feasible. The editors and authors are to be applauded for this highly readable and informative addition to the existing literature. . . This book is highly recommended to scholars and policy-makers interested in environmental law and human rights, and their intersections with poverty alleviation.’
– Paolo Galizzi, Journal of Human Rights and the Environment

‘The alleviation of poverty and the protection of the environment are both critical challenges for the vindication of basic human rights for all of humankind. This relationship is however not necessarily an easy one. While there is an inextricable link between poverty and the degradation of the environment, a sophisticated analysis of a problem needs to deal with those cases where the need to increase economic opportunity for poor communities may appear to conflict with fragile ecosystems or the preservation of traditional practices. This collection provides the most sustained engagement with these problems. Drawing on the expertise of a range of distinguished authors, this book presents the reader with an integrated global engagement with these problems. In doing so, it represents a landmark effort towards the creation of a coherent literature to deal with one of humankind’s most pressing challenges.’
– Dennis Davis, Judge of the High Court, South Africa

‘The complex, uneven and challenging relationships between poverty alleviation and environmental regulation are impossible to trace in a single book but this collection brings a carefully selected set of policy-relevant, context-responsive, practical legal analyses to bear in a fresh examination of the present and future challenges involved. This is a timely contribution in the search for regulatory responses that alleviate rather than exacerbate the myriad forms of adaptation apartheid now so painfully evident in the relationship between poverty, injustice and environmental degradation.’
– Anna Grear, University of Waikato, New Zealand

‘The subject of poverty cannot be ignored by environmentalists as the poor are the most affected by the diverse impacts of environmental degradation and climate change such as on water, natural resources and cultural heritage sites. In addition, slum dwellings exacerbate the plight of the poor. The book is a collection of diverse topics by renowned environmental legal experts which deal with the relationship between the alleviation of poverty and the protection of the environment. Each writer addresses the challenges raised in various issues and recommends solutions which range from linking with human rights, the need for public participation, the role of environmental courts and other mechanisms.’
– Koh Kheng-Lian, National University of Singapore
Contributors
Contributors: C.D. Aceves-Ávila, D. Behn, K. Bubna-Litic, M.A. Cohen, E. Couzens, J.J. Gonzalez Marquez, S. Gruber, O.F. Jáuregui, M. Kidd, Y. Le Bouthillier, P. Martin, A. Mumma, L.C. Paddock, C.G. Pring, G.W. Pring, S. Sabzwari, D.N. Scott, D. Shelton, S.L. Smith
Contents
Contents:

PART I: LINKAGES BETWEEN HUMAN RIGHTS, THE ENVIRONMENT AND POVERTY
2. Using Law and Equity for the Poor and the Environment
Dinah Shelton

3. The Right of Access to Water in South Africa
Michael Kidd

PART II: ENVIRONMENTAL DEGRADATION AND POVERTY: WHAT IS AT STAKE FOR ABORIGINAL PEOPLES?
4. Climate Change Impacts on the Poor – a Case-study of Australia’s Indigenous Population and the Impact of Australia’s Response on this Population
Karen Bubna-Litic

5. The Quest for Environmental Justice on a Canadian Aboriginal Reserve
Sidra Sabzwari and Dayna Nadine Scott

8. The Right of Access to Information as a Tool for Environmental Protection and Poverty Eradication in Mexico
Carla D. Aceves-Ávila

PART V: THE ROLE OF ENVIRONMENTAL COURTS IN THE FIGHT AGAINST POVERTY AND ENVIRONMENTAL DEGRADATION
11. The ‘Greening’ of Justice: Will it Help the Poor?
George W. (Rock) Pring and Catherine G. (Kitty) Pring

12. The Resolution of Urban Housing Development Disputes as a Mechanism for Poverty Alleviation: A Case Study of Kenya’s National Environment Tribunal
Albert Mumma

14. Poverty and the Loss of Cultural Heritage Sites
Stefan Gruber