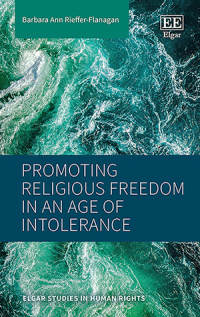 More Information
Critical Acclaim
Contents
More Information
In an age of intolerance where religious persecution is widespread, Barbara Ann Rieffer-Flanagan explores how societies can promote freedom of religion or belief as a fundamental right of citizens.

Examining the extent of religious persecution throughout the world, this cutting-edge book explores mechanisms to address religious intolerance and develop religious freedom, outlining the necessary factors to measure progress on the protection of this fundamental human right. Chapters explore how freedom of religion or belief can be institutionalized in dispositions, laws, and policies through efforts which limit negative depictions of the religious (or non-religious) Other in public discourse. Rieffer-Flanagan demonstrates how reforms that enhance the ability of civil society actors to operate can also promote freedom of religion or belief, and how states and IGOs can support these efforts. Ultimately, this innovative book proves that reforms must be continually nurtured for freedom of religion or belief to exist in society.

With interview-based research and a diverse range of regional case studies, this will be a vital resource for students and scholars of philosophy, religion, human rights law and political science. Considering the role of leaders in the promotion of religious tolerance, the book will also prove invaluable to policymakers concerned with human rights and freedom of religion or belief.
Critical Acclaim
‘In calling for a “coherent multilayered approach” to promote religious freedom, this thoughtful and comprehensive book of keen insight details the messy process of progress, offering comparative perspectives, policies and practices from around the world that can teach us all. Promoting Religious Freedom in an Age of Intolerance is that rare read of ready reference relevant to academics and activists alike.’
– Chris Seiple, President Emeritus, Institute for Global Engagement, US

‘This is an original and substantive work based on much reading, interviewing, and reflection. For those interested in religious tolerance and religious freedom, which are not the same, Flanagan shows well the difficult challenges to be overcome as well as laying out multiple paths to progress. Religion and politics are at the center of national and international affairs. This book helps the reader understand that important and complex linkage.’
– David P. Forsythe, University of Nebraska-Lincoln, US
Contents
Contents: Preface 1. Building religious freedom 2. History lessons on religious tolerance and religious freedom 3. Working collectively: multilateral approaches to the promotion of freedom of religion or belief 4. Protecting the faithful in foreign policy: Washington’s efforts on freedom of religion or belief 5. Reforming education: teaching narratives of religious tolerance 6. Tolerant leadership in Tashkent: the role of leaders in the promotion of religious tolerance 7. The role of civil society: the Institute for Global Engagement and Vietnam 8. Promoting religious freedom in Egypt 9. Tending to human dignity in the garden Index
Add to Wish List