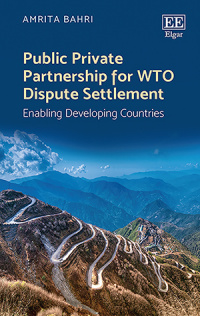 Building on more than five years of empirical investigation, Amrita Bahri reflects on the dispute settlement partnership experiences of the top DSU users from the developed and developing world. This enables her to evaluate a diverse range of dispute settlement partnership strategies, which have allowed the governments involved to harness resources and expertise from the private sector.

With practical suggestions on dispute settlement capacity building, this book provides a roadmap to policymakers, industry representatives and legal professionals on how to effectively engage with business entities for the resolution of international trade conflicts. It also provides a template for teaching and research activities to scholars focusing on international trade law, development studies and international dispute settlement.
Critical Acclaim
‘This book is a tremendous and timely contribution to the existing scholarship on law and development. Based on the full internalization of the literature, on painstaking empirical analysis and on an enriching comparative analysis, it explores the obstacles developing countries face in participating in legal institutions and suggests the strategies and synergies they can deploy to overcome them. The ultimate value of this strong project, not to be underscored in these critical times, is that legal institutions matter and can represent an important factor in shaping development.’
– Luca Rubini, Birmingham Law School, UK

‘This is a stimulating comparison of how governments in developed countries (the United States and the EU) and in key developing countries (Brazil, China and India) have been handling their industries’ complaints about foreign trade barriers. The lessons drawn in this study, on how such cooperation could be formalized and possibly improved from a developing country perspective, are worthwhile. Deserves a wide readership.’
– Marco Bronckers, Leiden University, the Netherlands