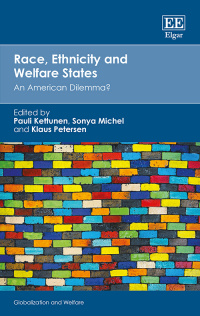 9781784715366 Edward Elgar Publishing
Globalization and Welfare series
Edited by Pauli Kettunen, Professor Emeritus of Political History, University of Helsinki, Finland, Sonya Michel, Department of History, University of Maryland, College Park, US and Klaus Petersen, Centre for Welfare State Research, University of Southern Denmark
Publication Date: 2015 ISBN: 978 1 78471 536 6 Extent: 288 pp
In this interdisciplinary volume, leading and emerging scholars examine the relationship between homogeneity and welfare state development. They trace Gunnar Myrdal’s influence on thinking about race in the US and explore current European states’ approaches to the strangers in their midst, and what social citizenship looks like from a global perspective.

More Information
Critical Acclaim
Contributors
Contents
More Information
In this interdisciplinary volume, leading and emerging scholars examine the relationship between homogeneity and welfare state development. They trace Gunnar Myrdal’s influence on thinking about race in the US and explore current European states’ approaches to the strangers in their midst, and what social citizenship looks like from a global perspective.

Myrdal’s An American Dilemma: The Negro Problem and Modern Democracy persuaded many scholars that the United States failed to develop a robust welfare state because of its ethnic and racial heterogeneity. Conversely, it argued that homogeneity was a precondition for the creation of strong welfare states in European, especially Nordic, countries. With increasing diversity now challenging these welfare states, the kind of ‘dilemma’ that Myrdal identified no longer appears to be solely an American one.

Students and scholars of contemporary welfare states in the social sciences and policy studies will find this to be an insightful read, as the book challenges current perceptions. It will also be of interest to policy makers and practitioners looking to examine the historical context behind the politics of welfare states in the US and Scandinavia.

Critical Acclaim
'A hugely important contribution to one of the key questions of our time: how to combine, in a socially just way, the universalism embodied in national welfare states with the diversity and transnational mobility of populations. Using Myrdal’s 1944 analysis, An American Dilemma: The Negro Problem and Modern Democracy, as a launch, the chapters circumnavigate this question 360 degrees across twentieth century history, across the Atlantic, and across the contemporary world, tracking the arguments this way and that. A must read.'
– Fiona Williams, University of Leeds, UK

‘Has racial and ethnic fragmentation undermined American social solidarity and undercut the US welfare state? Even more pertinently, now that we are all multiculturalists and every nation is a melting pot, do the formerly so-homogenous Europeans face similar dilemmas? Are they joining in a race to the social policy bottom, or have they found ways to overcome these divisions? Such questions are pursued by these fascinating essays that have relevance for both sides of the Atlantic, and for scholars and policy makers alike.’
– Peter Baldwin, Global Distinguished Professor, New York University, US
Contributors
Contributors: H. Blomberg-Kroll, G. Brochmann, R. Careja, P. Emmenegger, T. Faist, P. Kettunen, D. King, J. Kvist, S. Michel, M. Morey, H.B. Nassif, A. O’Connor, R.S. Parreñas, S. Pellander, K. Petersen, D. Roberts, A.V. Schwennicke, A.H. Sinno, E. Tatari, S. Williamson

PART I MYRDAL IN HIS TIME
1. Swedish Roots to Gunnar Myrdal’s An American Dilemma (1944)
Maribel Morey