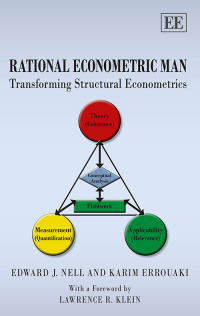 9781849801546 Edward Elgar Publishing
Edward J. Nell, Malcolm B. Smith Professor of Economics, New School for Social Research, US and Karim Errouaki, Special Advisor, Foundation for the Culture of Peace, Spain
Publication Date: 2013 ISBN: 978 1 84980 154 6 Extent: 576 pp
This challenging and original book takes a fresh, innovative look at econometrics, and re-examines the scientific standing of structural econometrics as developed by the founders (Frisch and Tinbergen) and extended by Haavelmo and the Cowles modellers (particularly Klein) during the period 1930–1960.

More Information
Critical Acclaim
Contents
More Information
This challenging and original book takes a fresh, innovative look at econometrics, and re-examines the scientific standing of structural econometrics as developed by the founders (Frisch and Tinbergen) and extended by Haavelmo and the Cowles modellers (particularly Klein) during the period 1930–1960.

The authors begin by rethinking the scientific foundations of structural econometrics, offering a way around the problem of induction that also justifies the assumption of a ‘data generating mechanism’, and of ways to model this. They go on to explain how current critiques of the methodological foundations of structural econometrics are direct consequences of implicitly accepted but seriously flawed elements in neoclassical thinking. In the final part they present their distinctive methodological contribution: a blend of fieldwork and conceptual analysis designed to ensure that their models are well grounded in reality, and at the same time, conceptually coherent as well as statistically adequate. In so doing, they outline a number of elements that will be needed to develop a ‘good’ macroeconometric model of an advanced economy.

Rational Econometric Man will prove a stimulating and thought-provoking read for scholars and researchers in the field of economics, and, more specifically, heterodox economics.
Critical Acclaim
‘This is a big book that presents big ideas and is well worth a read and re-read.’
– Richard Fowles, Eastern Economic Journal

‘If you are interested in understanding the underlying philosophical reasons why structural econometrics seems dead, read this book. Not only do the authors provide a comprehensive, stimulating and provocative account of the debate and literature, they also provide insightful suggestions for improving the bridge over the theory–data gap in economics. Their main suggestion that theorists and econometricians should do more fieldwork to improve not only economic theories but also econometric models is a refreshing breeze of intellectual honesty in a world where the relationship between the theorist and the econometrician has grown stale.’
– George C. Davis, Virginia Tech, US
Contents
Contents: Foreword by Lawrence R. Klein Introduction Part I: From Rational Economic Man to Rational Econometric Man 1. Re-reading Hollis and Nell 2. Haavelmo Reconsidered as Rational Econometric Man 3. Induction and the Empiricist Account of General Laws 4. Variables, Laws and Induction I: Are There Laws of Nature? 5. Variables, Laws and Induction II: Scientific Variables and Scientific Laws in Economics 6. The Concept of the ‘Model’ and the Methodology of Model Building Part II: The Critiques and the Foundations 7. Debating the Foundations: A New Perspective? 8. Scientific Issues in Structural Econometrics 9. Haavelmo and Beyond: Probability, Uncertainty, Specification and Stochasticism Part III: Structural Econometrics in its Place: Mapping New Directions 10. Conceptual Analysis, Fieldwork and the Methodology of Model Building 11. Working with Open Models: Lawlike Relations and an Uncertain Future Conclusion References Index
Add to Wish List
eBook for individuals
978 1 84980 962 7
From $40.00
Click here for options
eBook for library purchase
978 1 84980 962 7
View sample chapter and check access on: