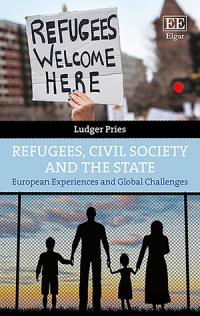 Refugees, Civil Society and the State

9781788116527 Edward Elgar Publishing
Ludger Pries, Ruhr-University Bochum, Germany
Publication Date: 2018 ISBN: 978 1 78811 652 7 Extent: 264 pp
Ludger Pries explores the important moral, social and political challenge facing Europe and the international community: the protection of refugees as one of the most vulnerable groups on the planet.

More Information
Critical Acclaim
Contents
More Information
Ludger Pries explores the important moral, social and political challenge facing Europe and the international community: the protection of refugees as one of the most vulnerable groups on the planet.

Combining an in-depth analysis of current research, own empirical studies in several European countries, and a critical review of the policies of nation-states as well as international and transnational organizations, the author analyses the 2015 so-called refugee crisis and its continuing impact. Who are the refugees, how and why did they come? Which parts of civil society were actively involved and why? What are the future responsibilities of the state for arriving refugees and their successful integration? This book examines the limitations of structural settings with perspectives on collective actors’ behaviour and strategies. Offering a critical view on the historical embedding of the refugee issue, as well as the current and future challenges for Europe, Pries provides an insightful overview of all aspects of the so-called European refugee crisis and its aftermath.

Refugees, Civil Society and the State merges perspectives from political science and international relations with international humanitarian law, the sociology of migration and action theory. Scholars, journalists and political actors who want to further understand the ongoing challenge of refugee protection will greatly benefit from the distinguished author’s research.

Critical Acclaim
‘Overall, the book is a good resource for anyone academically interested in refugee mobility, the EU’s response to the migration events of 2015 and to civil society’s reaction. The author has an eloquent writing style that makes the book easy to read including the sections providing legal and institutional background information. Therefore, the book soundly addresses a wide audience composed of students and academics from different disciplines in the social sciences.’
– Müge Dalkıran, Border Criminologies Blog

‘Ludger Pries shows how refugee flows are a symptom of a new transnational social question, revealing the weakness of the Common European Asylum framework, which has degenerated into a system of “organised non-responsibility”. In global terms, the United Nations’ refugee protection is breaking down, making new approaches essential. Pries’ institutional sociology approach points to possible ways forward, based on involvement of civil society and social movements, and strategies to reduce inequality within and between nations.’
– Stephen Castles, University of Sydney, Australia

‘Ludger Pries uses three dyads to provide a sophisticated examination of the “refugee crisis” of 2015: the global dynamics of migration vs methodological nationalism, the evolution of European legal asylum instruments vs “organized non-responsibility” on the part of some political leaders and, finally, internationalist solidarity movements vs right-wing populism. The result is an insightful analysis of events hitherto obscured by sensationalist headlines.’
– Robin Cohen, University of Oxford, UK
Contents
Contents 1. Challenges and opportunities of the refugee movement of 2015 in Europe 2. Arrival of refugees in the ‘hot autumn’ of 2015 3. ‘Refugee-crisis’ and social movement for refugee protection 4. The end of national autonomy and organised non-responsibility 5. The ‘causes’ of flight and refuge 6. Arrival – in Germany, in Europe and at oneself 7. Arrival and integration as participation with equal chances References Index