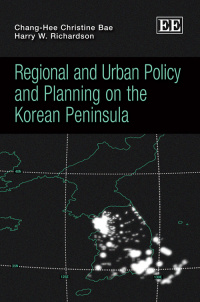 Regional and Urban Policy and Planning on the Korean Peninsula

9781849802840 Edward Elgar Publishing
Chang-Hee Christine Bae, Associate Professor of Urban Design and Planning, University of Washington, Seattle, US and Harry W. Richardson, Honorary Doctorate, Universidad Autonoma del Estado de Mexico
Publication Date: 2011 ISBN: 978 1 84980 284 0 Extent: 288 pp
The potential for reunification of the two Koreas, whether in the short or long term, argues for a comprehensive look at policy and planning issues that encompass the peninsula as a whole. This book deals with spatial policy issues in both South and North Korea in a broad and non-political way.

More Information
Critical Acclaim
Contributors
Contents
More Information
The potential for reunification of the two Koreas, whether in the short or long term, argues for a comprehensive look at policy and planning issues that encompass the peninsula as a whole. This book deals with spatial policy issues in both South and North Korea in a broad and non-political way.

Part one deals with South Korea, examining cultural changes, the capital city of Seoul, Greenbelt policy, the balanced national (regional) development strategy, and the new mega-regional approach. Part two delves into aspects of development in North Korea, such as the limitations of national statistics, the marketization of the economy, integration with the rest of North East Asia, and the need for a spatial infrastructure strategy. Part three examines the case for reunification in the interests of both the South and North. It argues that a transitional approach would be less costly and less risky than sudden reunification primarily via an early strategy of shifting more capital to the North and later by moderating migration flows to the South. The book also examines whether the capital should remain in Seoul or be relocated elsewhere should reunification occur.

Professors, students and public policy officials in the fields of Asian studies, regional economics and planning, urban studies and political science and any reader interested in the future of Korea will find this book very current and enlightening.
Critical Acclaim
‘. . . Christine Bae and Harry Richardson make an appropriate and significant contribution to understanding the Korean peninsula by dealing with the broader issues there, including reunification and hot spatial policy issues raised in South Korea. . . the contents of the book as a whole are fascinating and insightful. I see it as very helpful to an understanding of spatial policy and planning in the Korean peninsula by both international and Korean readers, and by both academic scholars and general readers.’
– Sam Ock Park, Journal of Regional Science
Contributors
With contributions from: Chang-Hee Christine Bae, Eric J. Heikkila, Myung-Jin Jun, Won Bae Kim, Suk Lee, Curtis Melvin, Jiyoung Park and Harry W. Richardson
Contents
Contents:

11. The Role of Markets in North Korea
Curtis Melvin

16. Options for the Capital of a Reunified Korea
Harry W. Richardson and Chang-Hee Christine Bae