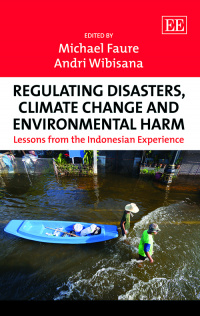 Lessons from the Indonesian Experience

The contributing authors deal with issues of globalization and especially the question of how globalization affects environmental harm – for example, examining how climate change is regulated in developing countries. Particular attention is paid to the programme for reducing emissions from deforestation and forest degradation (REDD+) and to the effectiveness of the Clean Development Mechanism. Specific focus is also given to the regulation of disasters and the problem of how victims of disasters can be compensated. The book considers issues of decision-making and public participation in decisions with respect to environmentally hazardous activities and finally, the subject of how indigenous knowledge and ‘local wisdom’ can be incorporated in environmental decision-making in developing countries is discussed. Important conclusions are drawn about how reliable institutions and instruments can be developed to guarantee decision-making which reduces the risks emerging from environmental degradation, climate change or disasters in that public interest. Recommendations are formulated to take into account the specific challenges and problems that developing countries are facing when proposing particular instruments or institutions.

This book will appeal to environmental lawyers, environmental policymakers, civil servants with competence for disasters, environmental decision-making or climate change, and environmental economists.
Critical Acclaim
‘Legal issues are often invisible in emergencies, yet their existence can often make the difference. By exploring the role that both traditional and innovative regulatory instruments may play in preventing and mitigating disasters, climate change and environmental problems, this volume represents a welcome addition to the emerging scholarship in disaster law. In choosing Indonesia as the privileged focus of study, this book does not only set the standard for innovative regulatory scholarship but also for cutting-edge, collaborative North–South academic projects.’
– Alberto Alemanno, HEC Paris, France and Editor, European Journal of Risk Regulation

‘This book provides a compelling view of the emerging system of environmental law in Indonesia, the world’s fourth most populous country and one of its most rapidly developing. Whilst Indonesia owes its legal traditions to Dutch civil law, a vibrant community of Indonesian environmental law scholars, many of whom are represented in this volume, has helped forge distinctive approaches to environmental regulation. With contributions also by leading European scholars, this is a significant addition to the existing literature on comparative studies in environmental law.’
– Rob Fowler, IUCN Academy of Environmental Law

‘In Regulating Disasters, Climate Change and Environmental Harm Michael Faure and Andri Wibisana bring together insightful analyses of how developing countries can manage serious hazards. Natural disasters have long been threats to developing countries, but now climate change is increasing many risks and posing new challenges. Using Indonesia as a case study, the volume explores issues of risk mitigation and compensation that many other countries also face.’
– Daniel Farber, University of California, Berkeley, US

PART I: GLOBALIZATION
1. Impacts of Globalization to Environment, Health and Safety in Developing Countries: The Case of Indonesia
I. Gede Eka Sarjana

6. Local Elections and Deforestation in Local Areas: Another Challenge for Indonesia in the Fight Against Climate Change
Deni Bram

8. The Need for Breaking New Ground in the Realm of Climate Change
Jaap Spier

10. The Myths of Environmental Compensation in Indonesia: Lessons from the Sidoarjo Mudflow
Andri Wibisana

14. Revitalization of the Kewang Institute in the Sustainable Management of Marine and Coastal Natural Resources in Maluku Province
Revency Vania Rugebregt