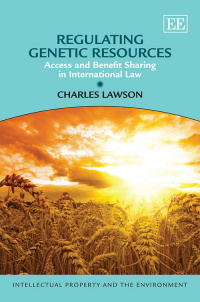 More Information
Critical Acclaim
Contents
More Information
This detailed and concise book surveys the international genetic resources laws applying in Antarctica, space, the oceans and seas, the lands, and the airspaces above land and water.

The well-structured analysis traces the evolution of these various schemes and their contributions to the comprehensive arrangements under the Convention on Biological Diversity, the International Treaty on Plant Genetic Resources for Food and Agriculture and the World Health Organization’s PIP Framework. The book details the different avenues and concluded positions, documenting a laboratory of legal approaches and possibilities.

Regulating Genetic Resources will be a valuable addition to academics, governments, NGOs and students in environmental and intellectual property law.
Critical Acclaim
‘An insightful guide to some key developments in the international governance of genetic resources. Exploration of the central role of state sovereignty in current approaches aids understanding of the impact that the socio-economic and political context has on the content and direction of rules in this area. The book includes extensive information on the influence of treaty regimes that are often marginal to or absent from other analyses of genetic resource governance (outer space, seas and oceans, and Antarctica).’
– Catherine Rhodes, The University of Manchester, UK