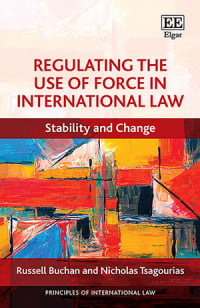 9781786439918 Edward Elgar Publishing
Principles of international law series
Russell Buchan, Senior Lecturer in International Law and Nicholas Tsagourias, Professor of International Law, University of Sheffield, UK
Publication Date: 2021 ISBN: 978 1 78643 991 8 Extent: 288 pp
This book provides a comprehensive and detailed analysis of the nature, content and scope of the rules regulating the use of force in international law as they are contained in the United Nations Charter, customary international law and international jurisprudence. It examines these rules as they apply to developing and challenging circumstances such as the emergence of non-State actors, security risks, new technologies and moral considerations.

This book is an important resource for students and scholars of international law, the use of force and collective security and for practitioners involved in the interpretation and application of these legal frameworks.

Critical Acclaim
‘The book is a worthwhile contribution to the literature on the legal regulation of the use of force and will be useful both to the expert and the relative novice in this field. Its contribution lies in the depth of argument on most issues and the expertise of the authors, alongside the clarity of their presentation of often complex issues in an accessible form.’
– T D Gill, The British Yearbook of International Law

‘Professors Buchan and Tsagourias have produced an exceptional exploration of how the international legal system regulates force. They expertly consider the subject from historical, contemporary and future perspectives. Students, scholars and practitioners alike will benefit from this full-spectrum study of how the UN Charter framework interacts and evolves with customary and other supplemental legal sources. They adroitly integrate political and moral considerations without compromising the rigour of their legal work to produce a formidable and lasting contribution to this challenging field of law.’
– Professor Sean Watts, United States Military Academy at West Point, US

‘A compelling review and reassessment of the jus ad bellum, which fully takes account of the dramatically changing landscape of international relations, the erosion of state sovereignty and the emergence of new technologies.’
– Professor Nigel D. White, University of Nottingham, UK

‘This is a lively, readable and concise account of the regulation of the use of force, bursting with contemporary examples. The use of force is perhaps the most contentious area of international law, its terms being loaded with presuppositions about law, politics and social relations. The authors present the material clearly for our assessment, while their present voice reminds us that there can be no finite answers to these difficult questions.’
– Professor Pål Wrange, Stockholm Centre for International Law and Justice, Stockholm University, Sweden