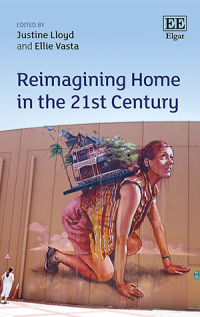 Reimagining Home in the 21st Century

9781786432926 Edward Elgar Publishing
Edited by Justine Lloyd and Ellie Vasta, Department of Sociology, Macquarie University, Australia
Publication Date: 2017 ISBN: 978 1 78643 292 6 Extent: 264 pp
Providing ways of reimagining home, this book demonstrates that thinking differently about home advances our understanding of processes of belonging. Authors in this collection explore home in relation to the figure of the stranger and public space, as well as with a focus on practices of dwelling and materialities. Through these frameworks, the collection as whole suggests that our home does not ‘belong’ to us, rather we ‘belong’ to home.

More Information
Critical Acclaim
Contributors
Contents
More Information
Asking us to think differently about the home, this book challenges the notion of a closed-off and self-sufficient place and reimagines home to be where we find our connections to others and the world. By exploring home in relation to the figure of the stranger and public space, as well as with a focus on practices of dwelling and materialities, the authors demonstrate that thinking differently about home advances our understanding of belonging as a social process in which we are all implicated.

Interrelated chapters challenge traditional, convenient and stereotypical notions of ‘home’. Specifically, the book provides a state-of-the-art cross-disciplinary conceptual framework; contributes to national and international discussions on the changing economic and social meanings of home; and provides analysis of areas and locations that are rarely thought of as involved in ‘home-making’, e.g. man caves; mobile homes; the home in public; senses of home; the migrant citizen/stranger.

This book is an essential resource for those involved in housing policy, issues around migration policies and to researchers working in other arenas such as cultural heritage. It is of particular interest to academics of sociology, anthropology and cultural studies, and those whose research investigates questions of domestic space and the politics of home.

Critical Acclaim
‘Justine Lloyd and Ellie Vasta, as editors of Reimagining Home in the 21st Century, were able to bring together empirically well-grounded and theoretically founded studies on the contemporary character of home(s). The thematic diversity is refreshing rather than confusing.’
– Tomáš Samec, International Journal of Housing Policy

‘This book is unsettling, in the most enjoyable way. “Home” has long been a scholarly obsession, but where others try to pin down its “meaning”, this collection revels in its multiplicity. By viewing home-making as practiced and mobile, these essays emphasise the “interactional achievement” of people, spaces and things. It examines its scale – from man-caves to nations – its spatiality – on public transport as much as in residences – and its temporality – as constant re-creation. This approach flags the contradictory and ambivalent nature of home-making as individual and collective projects of identity. In a world marked by a “crisis of home”, this collection examines the relation between agency and power as we struggle for coherence and continuity.’
– Greg Noble, University of Western Sydney, Australia

‘From “man caves” to commuter cars, “smart houses” to convivial kitchens, Reimagining Home in the 21st Century provides a rich and engaging window into the diverse lifeworlds that characterise the 21st Century.’
– Katherine Brickell, Royal Holloway, University of London, UK

‘Reimagining Home in the 21st Century is a timely book that addresses key themes of 21st century life; about where we belong, how we shape our present, imagine our future and are shaped by the mobility and migrations of those both close to us and more culturally distant. An invaluable contribution that sheds light on both the way we live now and the concepts we use to make sense of our time.’
– Michael Keith, University of Oxford, UK

‘Justine Lloyd and Ellie Vasta have done a fantastic job as editors in bringing together a group of critically minded scholars to write chapters on the meanings, practices and representations of home during a period of rapid social change. I have no doubt that Reimagining Home in the 21st Century will make an important contribution to academic scholarship by showcasing the considerable insights that can be achieved by interdisciplinary forms of inquiry.’
– Keith Jacobs, University of Tasmania, Australia
Contributors
Contributors: A. Ålund, J. Browitt, A. Deslandes, N. Ebert, M. Giuffre, O. Hamilton, E. Honeywill, J. Humphry, L. Kings, J. Lloyd, Y. Musharbash, S. Redshaw, C.-U. Schierup, A. Stebbing, S. Supski, I. Vanni Accarigi, E. Vasta

PART I Home-making and belonging: The Figure of the Stranger
2. Reflections on home and identity in late-modernity
Norbert Ebert

7. Without house or home? Understanding homelessness as dwelling
Adam Stebbing

11. Staying in place: meanings, practices and the regulation of publicness in Sydney’s Martin Place
Ann Deslandes and Justine Humphry