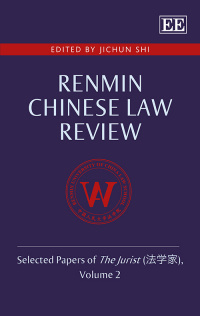 More Information
Contributors
Contents
More Information
Renmin Chinese Law Review, Voume. 2 is the second work in a series of annual volumes on contemporary Chinese law, which bring together the work of recognised scholars from China, offering a window on current legal research in China.

This volume aims to reflect study of Chinese law and the reality of Chinese legality and society. Chapters address developments in economic and commercial law, the new challenges China faces in human rights and Chinese international law studies which examines the withdrawal of an international treaty reservation of China and the non-interference policy.
This diverse comparative study will appeal to scholars of Chinese law, society and politics, members of diplomatic communities as well as legal professionals interested in China.

2. Restrictive Interpretation of Constitutionality on the Clause of ‘the Exception to Favorable Retrospect’ in the Criminal Law: Analysis Based on the Niu Yuqiang Case
Chen Peng

3. A New Approach to Distinguishing between Extensive Interpretation and Analogy
Qu Xinjiu

4. On Confiscation of Property under PRC Criminal Law
Zhang Mingkai

5. Sentencing Justice and Interpretation as the Object of Criminal Law
Jiang Tao

6. On the Latest Judicial Interpretation Related to the Crime of Insider Trading
Liu Xianquan

7. Research on Issues about the Applicable Scope of China’s Anti-Monopoly Law in Monopolistic Industries?
Meng Yanbei

8. The Judicial Dilemma and Method of Defining ‘Relevant Market’ in the Internet Industry: Based on the Perspective of the Two-sided Market?
Jiang Yanbo

10. Three Analyses of the Act of Claiming Authorship: A Comment on the ‘Local Drama of Anshun’ Case and Other Recent Cases?
Wang Qian

11. The Unregistered Well-Known Trademark System and its Improvement
Feng Xiaoqing

12. On China’s Withdrawal of its Reservation to CISG Article 1 (b)
Li Wei

13. The Customary Nature of the Principle of Non-intervention: A Methodological Note
Chen Yifeng