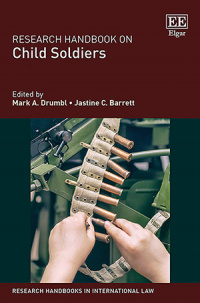 9781789903324 Edward Elgar Publishing
Research Handbooks in International Law series
Edited by Mark A. Drumbl, Class of 1975 Alumni Professor of Law and Director, Transnational Law Institute, Washington and Lee University, US and Jastine C. Barrett, Independent Human Rights Consultant and Honorary Researcher, Kent Law School, University of Kent, UK
Publication Date: 2021 ISBN: 978 1 78990 332 4 Extent: 576 pp
Child soldiers remain poorly understood and inadequately protected, despite significant media attention and many policy initiatives. This Research Handbook aims to redress this troubling gap. It offers a reflective, fresh and nuanced review of the complex issue of child soldiering. The Handbook brings together scholars from six continents, diverse experiences, and a broad range of disciplines. Along the way, it unpacks the life-cycle of youth and militarization: from recruitment to demobilization to return to civilian life. The overarching aim of the Handbook is to render the invisible visible – the contributions map the unmapped and chart new directions. Challenging prevailing assumptions and conceptions, the Research Handbook on Child Soldiers focuses on adversity but also capacity: emphasising the resilience, humanity, and potentiality of children affected (rather than ‘afflicted’) by armed conflict.

This comprehensive Research Handbook showcases diverse experiences and unique perspectives. It unpacks the life-cycle of youth and militarization: from recruitment, to demobilization, and return to civilian life. Challenging prevailing assumptions and conceptions, this uplifting Research Handbook focuses on the child soldier’s capacity to cope with adversity. In so doing, it emphasizes the resilience, humanity and potential of children affected – rather than ‘afflicted’ – by armed conflict.

The Research Handbook on Child Soldiers will be of interest to academics, practitioners and activists alike, with its extensive incorporation of cutting-edge fieldwork and the voices of the children themselves. Promoting equity between generations, this Research Handbook will also appeal to individuals from many walks of life who are concerned with the rights of the child in times of conflict, peace and the in-between.
Critical Acclaim
‘This Handbook is unique in combining different research methods and approaches across social, political and cultural studies of child soldiering. Thus, Drumbl and Barrett’s edited book is a valuable resource that contributes in two ways: both as an introduction to the study of child soldiering and all of its complexity; and in showcasing important empirical work, particularly from scholars who have been engaged in child soldier research for a long time.’
– Kate Macfarlane, Journal of Intervention and Statebuilding

'The Research Handbook on Child Soldiers is well balanced, and is less on abstractions and philosophizing, and more on offering erudite principle based solutions in respect of our efforts to conceptualise and understand child soldiers across disciplinary and professional divides. True to form, it also charts the way forward as the international community grapples with the ever changing nature of conflict. This book is not so much an idea whose time has come as it is an idea whose time is long overdue in coming.'
– Benyam Mezmur, University of the Western Cape, South Africa

‘For this Research Handbook, Jastine Barrett and Mark Drumbl have assembled an array of scholars, drawn from six continents, with expertise in multiple fields of law, humanities, and social sciences. Their writings deploy methodologies as varied as empirical study and doctrinal analysis in order to examine situations of armed conflict and other systemic violence, across a temporal spectrum of past, present, and future. Together, these contributions place this exciting volume at the vanguard of scholarship on child soldiers.’
– Diane Marie Amann, University of Georgia, School of Law, US

PART I THE CONCEPT AND CONSTRUCTION OF THE CHILD SOLDIER
1. In Search of the Lost Kingdom of Childhood
Mohamed Kamara

2. Challenges for the Protection of Child Victims of Recruitment and Use in an Era of Complex Armed Conflicts: The Colombian Case
Ana María Jiménez

3. The Construction of Gender in Child Soldiering in the Special Court for Sierra Leone
Valerie Oosterveld

4. ‘We Were Controlled, We Were Not Allowed to Express Our Sexuality, Our Intimacy Was Suppressed’: Sexual Violence Experienced by Boys
Omer Aijazi, Evelyn Amony and Erin Baines

5. Getting Tambo Out of Limbo: Exploring Alternative Legal Frameworks that are More Sensitive to the Agency of Children and Young People in Armed Conflict
Karl Hanson and Christelle Molima

6. This is Belonging: Children and British Military Recruitment
Rhys Crilley

9. Weaponizing the Weak: The Role of Children in Terrorist Groups
Mia Bloom

PART III ENCOUNTERS WITH THE LAW
13. The Regional African Legal Framework on Children: A Template for More Robust Action on Children and Armed Conflict?
Godfrey Odongo

14. Minors and Miners: Accountability Beyond Child Soldiering in the Democratic Republic of Congo
Sharanjeet Parmar and Yann Lebrat

20. Child Agency and Resistance to Discourses within the Paris Principles in Rehabilitation and Reintegration Processes of Former Child Soldiers in Northern Uganda
Grace Akello

22. Do No Harm: How Reintegration Programmes for Former Child Soldiers Can Cause Unintended Harm
Michael G. Wessells

23. How to Find the ‘Hidden’ Girl Soldier? Two Sets of Suggestions Arising from Liberia
Leena Vastapuu