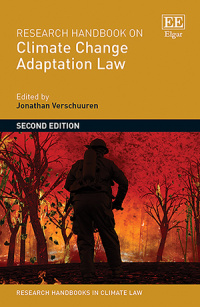 Providing a comprehensive review of new challenges faced as a result of a changing climate, this Second Edition considers the adaptation necessary to address the ongoing impacts from the warming of the Earth’s atmosphere at international, regional and domestic levels. It also analyses the legal instruments that go beyond helping societies to adapt to the changing climate, and assist in compensating victims of climate change damage. Chapters suggest forward-thinking approaches for how future policies and laws could help to create more climate resilient and stable societies, and offer a new insight into how climate change can affect both the local and international dimensions of security.

Critical Acclaim
‘With this second edition of the Research Handbook on Climate Change Adaptation Law, Jonathan Verschuuren and colleagues offer the necessary legal tools for the indispensable legal framework countries need to adapt to climate change. It was, is and remains the definitive text on climate change adaptation law for the coming years.’
– Kurt Deketelaere, KU Leuven, Belgium and University of Helsinki, Finland

‘The significantly updated second edition of this Research Handbook remains an indispensable resource on this important topic. It brings together leading experts on adaptation to consider a long list of key sectors and on critical cross-cutting issues, such as climate justice, displacement, and compensation. It does so at a level that is meaningful and insightful, without getting lost in the subtleties of the diverse legal systems challenged to deal with adaptation.’
– Meinhard Doelle, Dalhousie University, Canada