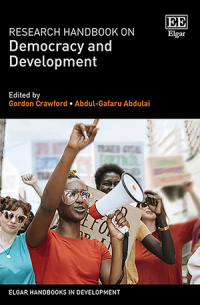 Research Handbook on Democracy and Development

More Information
Critical Acclaim
Contributors
Contents
More Information
Exploring and updating the controversial debates about the relationship between democracy and development, this Research Handbook provides clarification on the complex and nuanced interlinkages between political regime type and socio-economic development. Distinguished scholars examine a broad range of issues from multidisciplinary perspectives across Africa, Asia, Europe, Latin America and the Middle East.

Analysing the relationship between political regime types, including varieties of democracies and autocracies, and broader development indicators, chapters cover economic growth, poverty and human development, inequality, corruption, conflict, human rights, and environmental sustainability. The Research Handbook examines longstanding and unresolved debates in the field over the past 60 years, as well as investigating contemporary issues of rising global inequalities, the resurgence of authoritarian populism, and the crisis of liberal democracy.

Thorough and invigorating, this will be an essential read for social science scholars and students, particularly those studying sociology, politics, economics and global development studies. Policy makers and government officials dealing with foreign affairs and international development will appreciate the detailed case studies the Research Handbook offers.

Critical Acclaim
‘Democracy and development as inclusive pursuits do not come naturally to humans as self-interested actors. They require institutionalization and rules of practice to balance between autonomy and responsibility, the self and the collective. This impressive book, rich in theory and substantiation, reminds us why we must not give up on the imperatives of democracy and development despite the phenomenal challenges to their fulfillment.’
– Francis B. Nyamnjoh, University of Cape Town, South Africa

‘This is a volume of unusual quality, substantive breadth, and grounding in social science. The editors and contributors embed cutting-edge findings in the past two or three decades of scholarship on development and democracy, and on the relationship between the two. The volume will be valuable both as a resource and as a launching point for new research.’
– Catherine Boone, London School of Economics, UK

‘Too often it is taken for granted that democracy translates into development. The variety of reflections in this volume go beyond this convenient but far too easy equation. They offer valuable food for thought, motivating further deliberations in search and support of promoting and strengthening democracy as an ingredient to meaningful development.’
– Henning Melber, President of the European Association for Development Research and Training Institutes, Germany

‘Two of the most contested subjects in contemporary scholarship – democracy and development—are boldly unpacked, re-packaged, and (re)connected in this refreshing new text. The Handbook answers your foremost questions and foregrounds the timeliness and timelessness of these phenomena and their perplexities.’
– Olajumoke Yacob-Haliso, Babcock University, Nigeria

Introduction to Research Handbook on Democracy and Development : an
overview of the debates 1
Abdul-Gafaru Abdulai and Gordon Crawford